and the study of infectious diseases:

and many other situations.

A “stochastic” Petri net says the rate at which each transition occurs. We can think of these transitions as occurring randomly at a certain rate—and then we get a stochastic process described by something called the “master equation”. But for starters, we’ve been thinking about the limit where there are very many things in each state. Then the randomness washes out, and the expected number of things in each state changes deterministically in a manner described by the “rate equation”.

It’s time to explain the general recipe for getting this rate equation! It looks complicated at first glance, so I’ll briefly state it, then illustrate it with tons of examples, and then state it again.

One nice thing about stochastic Petri nets is that they let you dabble in many sciences. Last time we got a tiny taste of how they show up in population biology. This time we’ll look at chemistry and models of infectious diseases. I won’t dig very deep, but take my word for it: you can do a lot with stochastic Petri nets in these subjects! I’ll give some references in case you want to learn more.

A stochastic Petri net has a set of states and a set of transitions. Let’s concentrate our attention on a particular transition. Then the

times as the input to that transition, and

times as the output. Our transition also has a reaction rate

The rate equation answers this question:

is the number of things in the

. The answer is a sum of terms, one for each transition. Each term works the same way. For the transition we’re looking at, it’s

shows up because our transition destroys

of them. The big product over all states,

, shows up because our transition occurs at a rate proportional to the product of the numbers of things it takes as inputs. The constant of proportionality is the reaction rate

The formation of water (1)

But let’s do an example. Here’s a naive model for the formation of water from atomic hydrogen and oxygen:

This Petri net has just one transition: two hydrogen atoms and an oxygen atom collide simultaneously and form a molecule of water. That’s not really how it goes… but what if it were? Let’s use

for the number of hydrogen atoms, and so on, and let the reaction rate be

. Then we get this rate equation:

See how it works? The reaction occurs at a rate proportional to the product of the numbers of things that appear as inputs: two H’s and one O. The constant of proportionality is the rate constant

. So, the reaction occurs at a rate equal to

• Since two hydrogen atoms get used up in this reaction, we get a factor of

in the first equation.

• Since one oxygen atom gets used up, we get a factor of

in the second equation.

• Since one water molecule is formed, we get a factor of

in the third equation.

The formation of water (2)

Let me do another example, just so chemists don’t think I’m an absolute ninny. Chemical reactions rarely proceed by having three things collide simultaneously—it’s too unlikely. So, for the formation of water from atomic hydrogen and oxygen, there will typically be an intermediate step. Maybe something like this:

Here OH is called a ‘hydroxyl radical’. I’m not sure this is the most likely pathway, but never mind—it’s a good excuse to work out another rate equation. If the first reaction has rate constant

and the second has rate constant 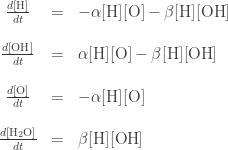 See how it works? Each reaction occurs at a rate proportional to the product of the numbers of things that appear as inputs. We get minus signs when a reaction destroys one thing of a given kind, and plus signs when it creates one. We don’t get factors of 2 as we did last time, because now no reaction creates or destroys two of anything.

The dissociation of water (1)

Calculating these rate constants is a big subject. I’m just starting to read this book, which looked like the easiest one on the library shelf:

But let’s not delve into these mysteries today. Let’s just take our naive Petri net for the formation of water and turn around all the arrows, to get the reverse reaction:

If the reaction rate is

See how it works? The reaction occurs at a rate proportional to

, since it has just a single water molecule as input. That’s where the

• Since two hydrogen atoms get formed in this reaction, we get a factor of +2 in the first equation.

• Since one oxygen atom gets formed, we get a factor of +1 in the second equation.

• Since one water molecule gets used up, we get a factor of +1 in the third equation.

The dissociation of water (part 2)

Of course, we can also look at the reverse of the more realistic reaction involving a hydroxyl radical as an intermediate. Again, we just turn around the arrows in the Petri net we had: 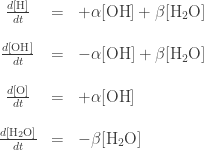 Do you see why? Test your understanding of the general recipe.

By the way: if you’re a category theorist, when I said “turn around all the arrows” you probably thought “opposite category”. And you’d be right! A Petri net is just a way of presenting a strict symmetric monoidal category that’s freely generated by some objects (the states) and some morphisms (the transitions). When we turn around all the arrows in our Petri net, we’re getting a presentation of the opposite symmetric monoidal category. For more details, try:

After I explain how stochastic Petri nets are related to quantum field theory, I hope to say more about this category theory business. But if you don’t understand it, don’t worry about it now—let’s do a few more examples.

The SI model is an extremely simple model of an infectious disease. We can describe it using this Petri net:

There are two states: susceptible and infected. And there’s a transition called infection, where an infected person meets a susceptible person and infects them.

is the number of susceptible people and

the number of infected ones. If the rate constant for infection is

the rate equation is

Do you see why?

By the way, it’s easy to solve these equations exactly. The total number of people doesn’t change, so

is a conserved quantity. Use this to get rid of one of the variables. You’ll get a version of the famous logistic equation, so the fraction of people infected must grow sort of like this:

Puzzle. Is there a stochastic Petri net with just one state whose rate equation is the logistic equation:

The SI model is just a warmup for the more interesting SIR model, which was invented by Kermack and McKendrick in 1927:

The SIR model has an extra state, called resistant, and an extra transition, called recovery, where an infected person gets better and develops resistance to the disease:

If the rate constant for infection is

and the rate constant for recovery is

, the rate equation for this stochastic Petri net is:

I don’t know a ‘closed-form’ solution to these equations. But Kermack and McKendrick found an approximate solution in their original paper. They used this to model the death rate from bubonic plague during an outbreak in Bombay that started in 1905, and they got pretty good agreement. Nowadays, of course, we can solve these equations numerically on the computer.

There’s an even more interesting model of infectious disease called the SIRS model. This has one more transition, called losing resistance, where a resistant person can go back to being susceptible. Here’s the Petri net:

Puzzle. If the rate constants for recovery, infection and loss of resistance are

, write down the rate equations for this stochastic Petri net.

In the SIRS model we see something new: cyclic behavior! Say you start with a few infected people and a lot of susceptible ones. Then lots of people get infected… then lots get resistant… and then, much later, if you set the rate constants right, they lose their resistance and they’re ready to get sick all over again! You can sort of see it from the Petri net, which looks like a cycle.

I learned about the SI, SIR and SIRS models from this great book:

For more models of this type, see:

A ‘compartmental model’ is closely related to a stochastic Petri net, but beware: the pictures in this article are not really Petri nets!

Now let me remind you of the general recipe and polish it up a bit. So, suppose we have a stochastic Petri net with

be the number of things in the

It’s really a bunch of equations, one for each

. But what is the right-hand side?

The right-hand side is a sum of terms, one for each transition in our Petri net. So, let’s assume our Petri net has just one transition! (If there are more, consider one at a time, and add up the results.)

th state appears as input to this transition

times, and as output

times. Then the rate equation is

is the rate constant for this transition.

That’s really all there is to it! But subscripts make my eyes hurt more and more as I get older—this is the real reason for using index-free notation, despite any sophisticated rationales you may have heard—so let’s define a vector

that keeps track of how many things there are in each state. Similarly let’s make up an input vector:

and an output vector:

for our transition. And a bit more unconventionally, let’s define

This looks a lot nicer!

Indeed, this emboldens me to consider a general stochastic Petri net with lots of transitions, each with their own rate constant. Let’s write

for the set of transitions and

for the rate constant of the transition

be the input and output vectors of the transition

. Then the rate equation for our stochastic Petri net is

That’s the fully general recipe in a nutshell. I’m not sure yet how helpful this notation will be, but it’s here whenever we want it.

Next time we’ll get to the really interesting part, where ideas from quantum theory enter the game! We’ll see how things in different states randomly transform into each other via the transitions in our Petri net. And someday we’ll check that the expected number of things in each state evolves according to the rate equation we just wrote down… at least in there limit where there are lots of things in each state.

This entry was posted on Sunday, April 3rd, 2011 at 4:52 am and is filed under biology, chemistry, networks. You can follow any responses to this entry through the RSS 2.0 feed. You can leave a response, or trackback from your own site.