In my first post in this series, we saw that filling in a well-known analogy between statistical mechanics and quantum mechanics requires a new concept: ‘quantropy’. To get some feeling for this concept, we should look at some examples. But to do that, we need to develop some tools to compute quantropy. That’s what we’ll do today.

Everything in this section is bog-standard. In case you don’t know, that’s British slang for ‘extremely, perhaps even depressingly, familiar’. Apparently it rains so much in England that bogs are not only standard, they’re the standard of what counts as standard!

be a measure space: physically, the set of states of some system. In statistical mechanics we suppose the system occupies states with probabilities given by some probability distribution

The entropy of this probability distribution is

There’s a nice way to compute the entropy when our system is in thermal equilibrium. This idea makes sense when we have a function

saying the energy of each state. Our system is in thermal equilibrium when

maximizes entropy subject to a constraint on the expected value of energy:

A famous calculation shows that thermal equilibrium occurs precisely when

is the so-called Gibbs state:

for some real number

is a normalization factor called the partition function:

is called the coolness, since physical considerations say that

is the temperature in units where Boltzmann’s constant is 1.

There’s a famous way to compute the entropy of the Gibbs state; I don’t know who did it first, but it’s both straightforward and tremendously useful. We take the formula for entropy

and substitute the Gibbs state

Reshuffling this a little bit, we obtain:

If we define the free energy by

then we’ve shown that

This justifies the term ‘free energy’: it’s the expected energy minus the energy in the form of heat, namely

It’s nice that we can compute the free energy purely in terms of the partition function and the temperature, or equivalently the coolness

Can we also do this for the entropy? Yes! First we’ll do it for the expected energy: 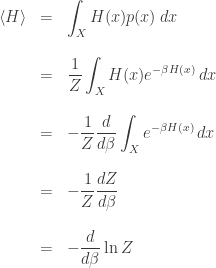 So, if we know the partition function of a system in thermal equilibrium as a function of the temperature, we can work out its entropy, expected energy and free energy.

Now we’ll repeat everything for quantropy! The idea is simply to replace the energy by action and the temperature

is Planck’s constant. It’s harder to get the integrals to converge in interesting examples. But we’ll worry about that next time, that when we actually do an example!

It’s annoying that in physics

stands for both entropy and action, since in this article we need to think about both. People also use

to stand for entropy, but that’s no better, since that letter also stands for ‘Hamiltonian’! To avoid this let’s use

to stand for action. This letter is also used to mean ‘Helmholtz free energy’, but we’ll just have to live with that. It would be real bummer if we failed to unify physics just because we ran out of letters.

be a measure space: physically, the set of histories of some system. In quantum mechanics we suppose the system carries out histories with amplitudes given by some function

The quantropy of this function is

There’s a nice way to compute the entropy in Feynman’s path integral formalism. This formalism makes sense when we have a function

saying the action of each history. Feynman proclaimed that in this case we have

is Planck’s constant and

is a normalization factor called the partition function:

Last time I showed that we obtain Feynman’s prescription for

by demanding that it’s a stationary point for the quantropy

subject to a constraint on the expected action:

As I mentioned last time, the formula for quantropy is dangerous, since we’re taking the logarithm of a complex-valued function. There’s not really a ‘best’ logarithm for a complex number: if we have one choice we can add any multiple of

and get another. So in general, to define quantropy we need to pick a choice of

That’s a lot of ambiguity!

Luckily, the ambiguity is much less when we use Feynman’s prescription for

Once we choose a logarithm for

, this formula will let us define

So let’s do this, and say the quantropy is

We can simplify this a bit, since the integral of

Reshuffling this a little bit, we obtain:

By analogy to free energy in statistical mechanics, let’s define the free action by

I’m using the same letter for free energy and free action, but they play exactly analogous roles, so it’s not so bad. Indeed we now have

which is the analogue of a formula we saw for free energy in thermodynamics.

It’s nice that we can compute the free action purely in terms of the partition function and Planck’s constant. Can we also do this for the quantropy? Yes!

It’ll be convenient to introduce a parameter

which is analogous to ‘coolness’. We could call it ‘quantum coolness’, but a better name might be classicality, since it’s big when our system is close to classical. Whatever we call it, the main thing is that unlike ordinary coolness, it’s imaginary! 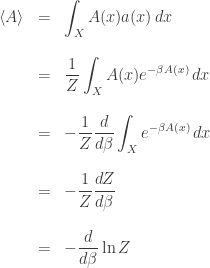 So, if we can compute the partition function in the path integral approach to quantum mechanics, we can also work out the quantropy, expected action and free action!

Next time I’ll use these formulas to compute quantropy in an example: the free particle. We’ll see some strange and interesting things.

Here’s where our analogy stands now:

I should also say a word about units and dimensional analysis. There’s enormous flexibility in how we do dimensional analysis. Amateurs often don’t realize this, because they’ve just learned one system, but experts take full advantage of this flexibility to pick a setup that’s convenient for what they’re doing. The fewer independent units you use, the fewer dimensionful constants like the speed of light, Planck’s constant and Boltzmann’s constant you see in your formulas. That’s often good. But here I don’t want to set Planck’s constant equal to 1 because I’m treating it as analogous to temperature—so it’s important, and I want to see it. I’m also finding dimensional analysis useful to check my formulas.

So, here’s how the dimensional analysis works in my setup:

I like this setup because I often think of entropy as closely allied to information, measured in bits or nats depending on whether I’m using base 2 or base e. From this viewpoint, it should be dimensionless.

This entry was posted on Friday, February 10th, 2012 at 3:15 pm and is filed under information and entropy, physics. You can follow any responses to this entry through the RSS 2.0 feed. You can leave a response, or trackback from your own site.