I’ve been talking a lot about ‘quantropy’. Last time we figured out a trick for how to compute it starting from the partition function of a quantum system. But it’s hard to get a feeling for this concept without some examples.

So, let’s compute the partition function of a free particle on a line, and see what happens…

The partition function of a free particle

Suppose we have a free particle on a line tracing out some path as time goes by:

Then its action is just the time integral of its kinetic energy:

is its velocity. The partition function is then

. Unfortunately, the space of all paths is infinite-dimensional, and the thing we’re integrating oscillates wildly. Integrals like this tend to make mathematicians run from the room screaming. For example, nobody is quite sure what

means in this expresson. There is no ‘Lebesgue measure’ on an infinite-dimensional vector space.

There is a lot to say about this, but if we just want to get some answers, it’s best to sneak up on the problem gradually.

The action, defined as an integral, is now equal to a finite sum:

but its final position

is arbitrary. Why? If we don’t ‘nail down’ the particle at some particular time, our path integrals will diverge. So, our space of histories is

and now we’re ready to apply the formulas we developed last time!

We saw last time that the partition function is the key to all wisdom, so let’s start with that. Naively, it’s

an obvious guess for a measure would be

However, the partition function should be dimensionless! You can see why from the discussion of units last time. But the quantity

has units of lengthn. To deal with this we can introduce a length scale, which I’ll call

and use the measure

I should however emphasize that despite the notation

I’m not discretizing space, just time. We could also discretize space, but it would make the calculation a lot harder. I’m only introducing this length scale

to make our measure on the space of histories dimensionless.

Now let’s compute the partition function. For starters, we have

Normally when I see an integral bristling with annoying constants like this, I switch to a system of units where most of them equal 1. But I’m trying to get a physical feel for quantropy, so I’ll leave them all in. That way, we can see how they affect the final answer.

we can show that

To show this, we need to work out the Jacobian of the transformation from the

coordinates on our space of histories—but this is easy to do, since the determinant of a triangular matrix is the product of its diagonal entries.

We can rewrite the path integral using this change of variables:

But since an exponential of a sum is a product of exponentials, this big fat n-tuple integral is really just a product of n ordinary integrals. And all these integrals are equal, so we just get some integral to the nth power! Let’s call the variable in this integral

, since it could be any of the

How do we do the integral here? Well, that’s easy…

We should all know the integral of our favorite Gaussian. As a kid, my favorite was this:

because this looks the simplest. But now, I prefer this:

They’re both true, so why did my preference change? First, I now like

There’s a whole manifesto about this, and I agree with it. Second,

for what we’re doing, since kinetic energy is one half the mass times the velocity squared. Originally physicists like Descartes and Leibniz defined kinetic energy to be

but the factor of 1/2 turns out to make everything work better. Nowadays every Hamiltonian or Lagrangian with a quadratic term in it tends to have a 1/2 in front—basically because the first thing you do with it is differentiate it, and the 1/2 cancels the resulting 2. The factor of 1/2 is just a convention, even in the definition of kinetic energy, but if we didn’t make that convention we’d be punished with lots of factors of 2 all over.

Or course it doesn’t matter much: you just need to remember the integral of some Gaussian, or at least know how to calculate it. And you’ve probably read this quote:

A mathematician is someone to whom

So, you probably learned the trick for doing this integral, so you can call yourself a mathematician.

Stretching the above Gaussian by a factor of

increases the integral by a factor of

This is clear when

is positive, but soon we’ll apply it when

is imaginary! That makes some mathematicians sweaty and nervous. For example, we’re saying that

But this integral doesn’t converge if you slap absolute values on the function inside: in math jargon, the function inside isn’t ‘Lebesgue integrable’. But we can tame it in various ways. We can impose a ‘cutoff’ and then let it go to infinity:

or we can damp the oscillations, and then let the amount of damping go to zero:

We get the same answer either way, or indeed using many other methods. Since such tricks work for all the integrals I’ll write down, I won’t engage in further hand-wringing over this issue. We’ve got bigger things to worry about, like: what’s the physical meaning of quantropy?

Where were we? We had this formula for the partition function:

and now we’re letting ourselves use this formula:

is imaginary, so we get

And a nice thing about keeping all these constants floating around is that we can use dimensional analysis to check our work. The partition function should be dimensionless, and it is! To see this, just remember that

has dimensions of inverse action, or

Now that we’ve got the partition function, what do we do with it? We can compute everything we care about. Remember, in statistical mechanics there’s a famous formula:

and last time we saw that similarly, in quantum mechanics we have:

where the classicality is

Last time I showed you how to compute

starting from the partition function. So, we can use the above formula to work out the quantropy as well:

But let’s start with the expected action. The answer will be so amazingly simple, yet strange, that I’ll want to spend the rest of this post discussing it. 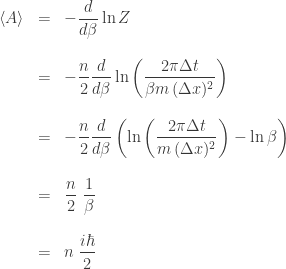 Wow! When get an answer this simple, it must mean something! This formula is saying that the expected action of our freely moving quantum particle is proportional to

the number of time steps. Each time step contributes

to the expected action. The mass of the particle, the time step

and the length scale

don’t matter at all!

Why don’t they matter? Well, you can see from the above calculation that they just disappear when we take the derivative of the logarithm containing them. That’s not a profound philosophical explanation, but it implies that our action could be any quadratic function like this:

are positive numbers, and we’d still get the same expected action:

The quadratic function we’re talking about here is an example of a quadratic form. Because the numbers

Whenever the action is a positive definite quadratic form on an n-dimensional vector space of histories, the expected action is

For example, take a free particle in 3d Euclidean space, and discretize time into

steps as we’ve done here. Then the action is a positive definite quadratic form on a 3n-dimensional vector space:

since now each velocity

is a vector with 3 components. So, the expected action is

is the total number of ‘decisions’ our particle makes throughout its history. What do I mean by that? In the path integral approach to quantum mechanics, a system can trace out any history it wants. But takes a bunch of real numbers to determine a specific history. Each number counts as one ‘decision’. And in the situation we’ve described, each decision contributes

to the expected action.

So here’s a more intuitive way to think about our result:

In the path integral approach to quantum theory, each ‘decision’ made by the system contributes

to the expected action… as long as the action is given by a positive definite quadratic form on some vector space of histories.

There’s a lot more to say about this. For example, in the harmonic oscillator the action is a quadratic form, but it’s not positive definite. What happens then? But three more immediate questions leap to my mind:

1) Why is the expected action imaginary?

2) Should we worry that it diverges as

3) Is this related to the heat capacity of an ideal gas?

So, let me conclude this post by trying to answer those.

Why is the expected action imaginary?

is real. How in the world can its expected value be imaginary?

The reason is that we’re not taking its expected value with respect to an probability measure, but instead, with respect to a complex-valued measure. Last time we gave this very general definition:

is imaginary, so it’s not surprising that this ‘expected value’ is complex-valued.

Later we’ll see a good reason why it has to be purely imaginary.

Consider our particle on a line, with time discretized into

time steps. Its expected action is

To take the continuum limit we must let

in such a way that

stays constant. Some quantities will converge when we take this limit, but the expected action will not. It will go to infinity!

That’s a bit sad, but not unexpected. It’s a lot like how the expected length of the path of a particle carrying out Brownian motion is infinite. In 3 dimensions, a typical Brownian path looks like this: In fact the free quantum particle is just a ‘Wick-rotated’ version of Brownian motion, where we replace time by imaginary time, so the analogy is fairly close. The action we’re considering now is not exactly analogous to the arclength of a path:

Instead, it’s proportional to this quadratic form:

However, both these quantities diverge when we discretize Brownian motion and then take the continuum limit.

Is this related to the heat capacity of an ideal gas?

That may seem like a strange question, unless you remember some formulas about the thermodynamics of an ideal gas!

Let’s say we’re in 3d Euclidean space. (Most of us already are, but some of my more spacy friends will need to pretend.) If we have an ideal gas made of

its expected energy is

is Boltzmann’s constant. This is a famous fact, which lets people compute the heat capacity of a monatomic ideal gas.

On the other hand, we’ve seen that in quantum mechanics, a single point particle will have an expected action of

These results look awfully similar. Are they related?

Yes! These are just two special cases of the same result! The energy of the ideal gas is a quadratic form on a

while in quantum mechanics we have

Mathematically, they are the exact same problem except that

is real in one case, imaginary in the other. This is another example of the analogy between statistical mechanics and quantum mechanics—the analogy that motivated quantropy in the first place!

And this makes it even more obvious that the expected action must be imaginary… at least when the action is a positive definite quadratic form.

This entry was posted on Saturday, February 18th, 2012 at 6:51 am and is filed under physics, probability. You can follow any responses to this entry through the RSS 2.0 feed. You can leave a response, or trackback from your own site.