In Part 13 we saw an example of a Nash equilibrium where both players use a mixed strategy: that is, make their choice randomly, using a certain probability distribution on their set of mixed strategies.

We found this Nash equilibrium using the oldest method known to humanity: we guessed it. Guessing is what mathematicians do when we don’t know anything better to do. When you’re trying to solve a new kind of problem, it’s often best to start with a very easy example, where you can guess the answer. While you’re doing this, you should try to notice patterns! These can give you tricks that are useful for harder problems, where pure guessing won’t usually work so well.

So now let’s try a slightly harder example. In Part 13 we looked at the game ‘matching pennies’, which was a zero-sum game. Now we’ll look at a modified version. It will still be a zero-sum game. We’ll find a Nash equilibrium by finding each player’s ‘maximin strategy’. This technique works for zero-sum two-player normal-form games, but not most other games.

Why the funny word ‘maximin’?

Think about that sentence: it’s tricky! But it explains the funny word ‘maximin’. In brief, you’re trying to maximize the minimum of your expected payoff.

We’ll make this more precise in a while… but let’s dive in and look at a new game!

Let’s write this game in normal form! If we say

We can also break this into two matrices in the usual way, one showing the payoff for A:

and one showing the payoff for B:

Before we begin our real work, here are some warmup puzzles:

Puzzle 1. Is this a zero-sum game?

Puzzle 2. Is this a symmetric game?

Puzzle 3. Does this game have a Nash equilibrium if we consider only pure strategies?

Puzzle 4. Does this game have a dominant strategy for either player A or player B?

Remember that we write A’s mixed strategy as

is the probability that A makes choice 1: that is, chooses heads.

is the probability that A makes choice 2: that is, chooses tails. Similarly, we write B’s mixed strategy as

is the probability that B makes choice 1, and

is the probability that B makes choice 2.

Given all this, the expected value of A’s payoff is

Now let’s actually calculate the expected value of A’s payoff. It helps to remember that probabilities add up to 1, so

It’s good to have fewer variables to worry about! So, we’ll solve for

Then we can calculate A’s expected payoff. We start by computing 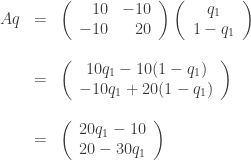 If B makes choice 1 with probability 100%, then

If we graph this as a function of

we get a straight line:

On the other hand, if B makes choice 2 with probability 100%, then

Graphing this, we get:

The point of these graphs becomes clearer if we draw them both together:

Some interesting things happen where the lines cross! We’ll get A’s maximin strategy by picking the value of

where these lines cross! And in fact, there’s a Nash equilibrium where player A chooses this value of

and B uses the same trick to choose his value of

But we can already see something simpler. We’ve drawn graphs of A’s expected payoff for two extreme cases of player B’s mixed strategy:

Suppose B uses some other mixed strategy, say

for example. Now A’s expected payoff will be something between the two lines we’ve drawn. Let’s see what it is:

If we graph this along with our other two lines, we get this:

We get a line between the other two, as we expect. But more importantly, all three lines cross at the same point!

That’s not a coincidence, that’s how it always works. If we draw lines for more different choices of B’s mixed strategy, they look like this:

The point where they all intersect looks important! It is. Soon we’ll see why.

Now we’ll find A’s maximin strategy. Let me explain the idea a bit more. The idea is that A is cautious, so he wants to choose

Read that last sentence a few times, because it’s confusing at first.

Given this, let’s figure out what A should do. A should look at different mixed strategies B can use, and graph A’s payoff as a function of

Then, he should choose

that maximizes his expected payoff in the worst-case scenario. To do this, he should focus attention on the lines that give him the smallest expected payoff:

This is the dark curve. It’s not very ‘curvy’, but mathematicians consider a broken line to be an example of a curve!

To find this dark curve, all that matters are extreme cases of B’s strategy: the case

So we can ignore the intermediate cases, and simplify our picture:

The dark curve is highest where the two lines cross! This happens when

or in other words

So, A’s maximin strategy is

Next let’s give the other guy a chance. Let’s work out B’s expected payoff and maximin strategy. The expected value of B’s payoff is

, but it’s quicker to remember that this is a zero-sum game:

and since we already saw that

• The case where A always makes choice 1:

• The case where A always makes choice 2:

We’ll get two functions of

whose graphs are lines. Then we’ll find where these lines intersect!

Let’s get to work. When

I won’t graph these two lines, but they intersect when

Hmm, it’s sort of a coincidence that we’re getting the same number that we got for

it won’t always work this way! But anyway, we see that B’s maximin strategy is

Now let’s put the pieces together. What happens in a zero-sum game when player A and player B both choose a maximin strategy? It’s not too surprising: we get a Nash equilibrium!

Let’s see why in this example. (We can do a general proof later.) We have

form a Nash equilibrium, we need to check that neither player could improve their expected payoff by changing to a different mixed strategy. Remember:

Definition. Given a 2-player normal form game, a pair of mixed strategies

1) For all mixed strategies

2) For all mixed strategies

We can reuse one of our old calculations to see that

Hmm, A’s expected payoff is always 2, no matter what mixed strategy he uses, as long as B uses his maximin strategy

So of course we have

If you don’t believe me, we can calculate

and see it equals

is a Nash equilibrium by showing that for all mixed strategies

Puzzle 6. How high does this dark curve get?

You have the equations for the two lines, so you can figure this out. Explain the meaning of your answer!

This entry was posted on Wednesday, February 20th, 2013 at 8:40 pm and is filed under game theory, mathematics. You can follow any responses to this entry through the RSS 2.0 feed. You can leave a response, or trackback from your own site.