The role of differential equations

Last time we looked at stochastic Petri nets, which use a random event model for the reactions. Individual entities are represented by tokens that flow through the network. When the token counts get large, we observed that they can be approximated by continuous quantities, which opens the door to the application of continuous mathematics to the analysis of network dynamics.

A key result of this approach is the “rate equation,” which gives a law of motion for the expected sizes of the populations. Equilibrium can then be obtained by solving for zero motion. The rate equations are applied in chemistry, where they give the rates of change of the concentrations of the various species in a reaction.

But before discussing the rate equation, here I will talk about the mathematical form of this law of motion, which consists of differential equations. This form is naturally associated with deterministic systems involving continuous magnitudes. This includes the equations of motion for the sine wave: 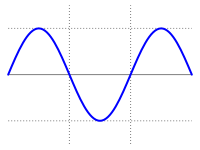 and the graceful ellipses that are traced out by the orbits of the planets around the sun:

This post provides some mathematical context to programmers who have not worked on scientific applications. My goal is to get as many of you on board as possible, before setting sail with Petri net programming.

Let’s first consider the major approaches to equations in general. We’ll illustrate with a Diophantine equation

In the formula-based approach, we seek formulas to describe the solutions. Here is an example of a formula (which does not solve our equation):

Such formulas are nice to have, but the pursuit of them is diabolically difficult. In fact, for Diophantine equations, even the question of whether an arbitrarily chosen equation has any solutions whatsoever has been proven to be algorithmically undecidable.

Finally, in the computational approach, we seek algorithms to enumerate or numerically approximate the solutions to the equations.

The three approaches to differential equations

Consider the equation stating that a variable increases at a rate equal to its current value. The bigger it gets, the faster it increases. Given a starting value, this determines a process — the solution to the equation — which here is exponential growth.

be the value at time

These are first-order equations, because the derivative is applied at most once to any variable. They are linear equations, because the terms on each side of the equations are linear combinations of either individual variables or derivatives (in this case all of the coefficients are 1). Note also that a system of differential equations may in general have zero, one, or multiple solutions. This example belongs to a class of equations which are proven to have a unique solution for each initial condition.

Now here is a simple illustration of what I called the theoretical approach. Can

when it is still positive. That is to say,

. But that contradicts the assumption

. The general lesson here is that we don’t need a solution formula in order to make such inferences.

For the rate equations, the theoretical approach leads to substantial theorems about the existence and structure of equilibrium solutions.

It is natural to look for concise formulas to solve our equations, but the results of this overall quest are largely negative. The exponential differential equation cannot be solved by any formula that involves a finite combination of simple operations. So the solution function must be treated as a new primitive, and given a name, say

. But even when we extend our language to include this new symbol, there are many differential equations that remain beyond the reach of finite formulas. So an endless collection of primitive functions is called for. (As standard practice, we always include

and its complex extensions to the trigonometric functions, as primitives in our toolbox.)

But the hard mathematical reality does not end here, because even when solution formulas do exist, finding them may call for an ace detective. Only for certain classes of differential equations, such as the linear ones, do we have systematic solution methods.

The picture changes, however, if we let the formulas contain an infinite number of operations. Then the arithmetic operators give a far-reaching base for defining new functions. In fact, as you can verify, the power series

which we view as an “infinite polynomial” over the time parameter t, exactly satisfies our equations for exponential motion,

By the way, applying it to the input 1 produces a definition for the transcendental number

Let’s leave aside our troubles with formulas, and consider the computational approach. For broad classes of differential equations, there are approximation algorithms that be successfully applied.

For starters, any power series that satisfies a differential equation may work for a simple approximation method. If a series is known to converge over some range of inputs, then one can approximate the value at those points by stopping the computation after a finite number of terms.

But the standard methods work directly with the equations, provided that they can be put into the right form. The simplest one is called Euler’s method. It works over a sampling grid of points separated by some small number

. Let’s take the case where we have a first-order equation in explicit form, which means that

We begin with the initial value

Then for the interval from 0 to

,we use a linear approximation for

, by assuming that the derivative remains constant at

Applying this to our exponential equation, where

So the approximation method gives a discrete exponential growth, which converges to a continuous exponential in the limit as the mesh size goes to zero.

The challenging world of differential equations

So, is our cup half-empty or half-full? We have no toolbox of primitive formulas for building the solutions to all differential equations by finite compositions. And even for those which can be solved by formulas, there is no general method for finding the solutions. That is how the cookie crumbles. But on the positive side, there is an array of theoretical tools for analyzing and solving important classes of differential equations, and numerical methods can be applied in many cases.

The study of differential equations leads to some challenging problems, such as the Navier-Stokes equations, which describe the flow of fluids.

These are partial differential equations involving flow velocity, pressure, density and external forces (such as gravity), all of which vary over space and time. There are non-linear (multiplicative) interactions between these variables and their spatial and temporal derivatives, which leads to complexity in the solutions.

At high flow rates, this complexity can produce chaotic solutions, which involve complex behavior at a wide range of resolution scales. This is turbulence. Here is an insightful portrait of turbulence, by Leonardo da Vinci, whose studies in turbulence date back to the 15th Century. Turbulence, which has been described by Richard Feynman as the most important unsolved problem of classical physics, also presents a mathematical puzzle. The general existence of solutions to the Navier-Stokes equations remains unsettled. This is one of the “Millennium Prize Problems”, for which a one million dollar prize is offered: in three dimensions, given initial values for the velocity and scalar fields, does there exist a solution that is smooth and everywhere defined? There are also complications with grid-based numerical methods, which will fail to produce globally accurate results if the solutions contain details at a smaller scale than the grid mesh. So the ubiquitous phenomenon of turbulence, which is so basic to the movements of the atmosphere and the seas, remains an open case.

But fortunately we have enough traction with differential equations to proceed directly with the rate equations for Petri nets. There we will find illuminating equations, which are the subject of both major theorems and open problems. They are non-linear and intractable by formula-based methods, yet, as we will see, they are well handled by numerical methods.

This entry was posted on Friday, April 19th, 2013 at 2:58 pm and is filed under mathematics, networks, software. You can follow any responses to this entry through the RSS 2.0 feed. You can leave a response, or trackback from your own site.