The Pentagram of Venus

This image, made by Greg Egan, shows the orbit of Venus.

It’s called the pentagram of Venus, because it has 5 ‘lobes’ where Venus makes its closest approach to Earth. At each closest approach, Venus move backwards compared to its usual motion across the sky: this is called retrograde motion.

Actually, what I just said is only approximately true. The Earth orbits the Sun once every

days. Venus orbits the Sun once every

days. So, Venus orbits the Sun in

That’s pretty close! So in 8 Earth years, Venus goes around the Sun almost 13 times. Actually, it goes around 13.004 times.

During this 8-year cycle, Venus gets as close as possible to the Earth about

times. And each time it does, Venus moves to a new lobe of the pentagram of Venus! This new lobe is

steps ahead of the last one. Check to make sure:

That’s why they call it the pentagram of Venus!

When Venus gets as close as possible to us, we see it directly in front of the Sun. This is called an inferior conjunction. Astronomers have names for all of these things:

So, every 8 years there are about 5 inferior conjunctions of Venus.

Puzzle 1: Suppose the Earth orbits the Sun n times while another planet, closer to the Sun, orbits it m times. Under what conditions does the ‘generalized pentagram’ have k = m – n lobes? (The pentagram of Venus has 5 = 13 – 8 lobes.)

Puzzle 2: Under what conditions does the planet move forward j = n – k steps each time it reaches a new lobe? (Venus moves ahead 3 = 8 – 5 steps each time.)

Now, I’m sure you’ve noticed that these numbers:

Puzzle 3: Is this just a coincidence?

As you may have heard, ratios of consecutive Fibonacci numbers give the best approximations to the golden ratio φ = (√5 – 1)/2. This number actually plays a role in celestial mechanics: the Kolmogorov–Arnol’d–Moser theorem says two systems vibrating with frequencies having a ratio equal to φ are especially stable against disruption by resonances, because this number is hard to approximate well by rationals. But the Venus/Earth period ratio 0.615187 is actually closer to the rational number 8/13 ≈ 0.615385 than φ ≈ 0.618034. So if this period ratio is trying to avoid rational numbers by being equal to φ, it’s not doing a great job!

It’s all rather tricky, because sometimes rational numbers cause destabilizing resonances, as we see in the gaps of Saturn’s rings:

whereas other times rational numbers stabilize orbits, as with the moons of Jupiter:

I’ve never understood this, and I’m afraid no amount of words will help me: I’ll need to dig into the math.

Given my fascination with rolling circles and the number 5, I can’t believe that I learned about the pentagram of Venus only recently! It’s been known at least for centuries, perhaps millennia. Here’s a figure from James Ferguson’s 1799 book Astronomy Explained Upon Sir Isaac Newton’s Principles:

Naturally, some people get too excited about all this stuff—the combination of Venus, Fibonacci numbers, the golden ratio, and a ‘pentagram’ overloads their tiny brains. Some claim the pentagram got its origin from this astronomical phenomenon. I doubt we’ll ever know. Some get excited about the fact that a Latin name for the planet Venus is Lucifer. Lucifer, pentagrams… get it?

I got the above picture from here:

• Venus and the pentagram, Grand Lodge of British Columbia and Yukon.

This website is defending the Freemasons against accusations of Satanism!

On a sweeter note, the pentagram of Venus is also called the rose of Venus. You can buy a pendant in this pattern: 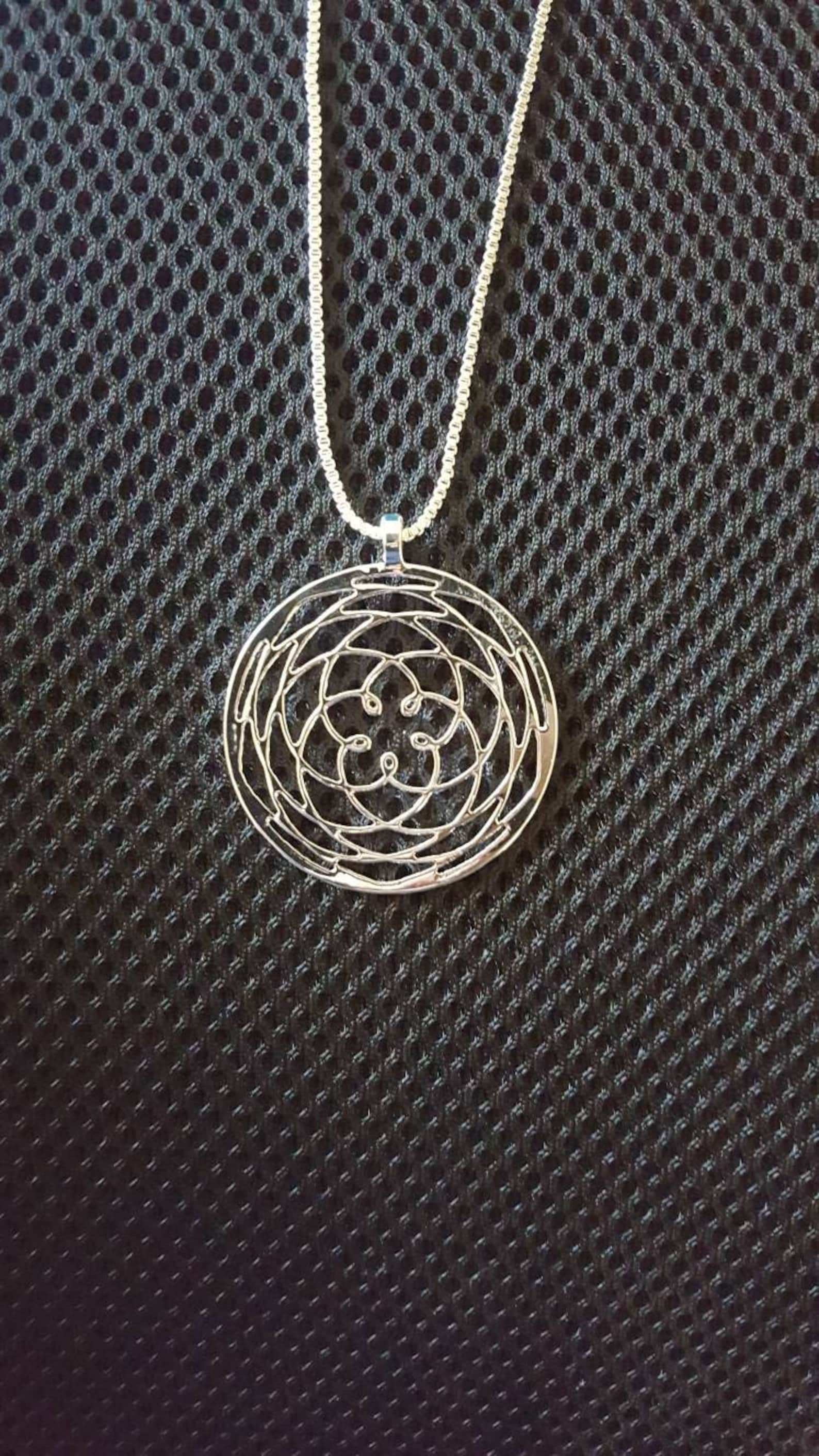 It’s pretty—but according to the advertisement, that’s not all! It’s also “an energetic tool that creates a harmonising field of Negative Ion around our body to support and balance our own magnetic field and aura.”

In The Da Vinci Code, someone claims that Venus traces “a perfect pentacle across the ecliptic sky every 8 years.”

But it’s not perfect! Every 8 years, Venus goes around the Sun 13.004 times. So the whole pattern keeps shifting. It makes a full turn about once every 1920 years. You can see this slippage using this nice applet, especially if you crank up the speed:

Also, the orbits of Earth and Venus aren’t perfect circles!

This entry was posted on Saturday, January 4th, 2014 at 10:55 am and is filed under astronomy. You can follow any responses to this entry through the RSS 2.0 feed. You can leave a response, or trackback from your own site.

67 Responses to The Pentagram of Venus