Among the Bone Eaters

Anthropologists sometimes talk about the virtues and dangers of ‘going native’: doing the same things as the people they’re studying, adopting their habits and lifestyles—and perhaps even their beliefs and values. The same applies to field biologists: you sometimes see it happen to people who study gorillas or chimpanzees.

It’s more impressive to see someone go native with a pack of hyenas: 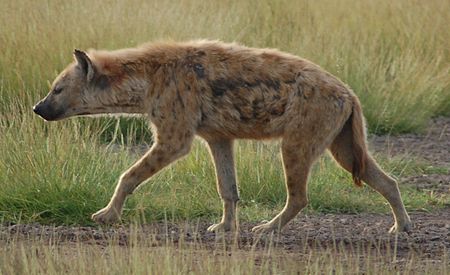 This is a spotted hyena, the species of hyena that Marcus Baynes-Rock befriended in the Ethiopian city of Harar. Their bite force has been estimated at 220 pounds!

(As a scientist I should say 985 newtons, but I have trouble imagining what it’s like to have teeth pressing into my flesh with a force of 985 newtons. If you don’t have a feeling for ‘pounds’, just imagine a 100-kilogram man standing on a hyena tooth that is pressing into your leg.)

So, you don’t want to annoy a hyena, or look too edible. However, the society of hyenas is founded on friendship! It’s the bonds of friendship that will make one hyena rush in to save another from an attacking lion. So, if you can figure out how to make hyenas befriend you, you’ve got some heavy-duty pals who will watch your back.

In Harar, people have been associating with spotted hyenas for a long time. At first they served as ‘trash collectors’, but later the association deepened. According to Wikipedia:

Written records indicate that spotted hyenas have been present in the walled Ethiopian city of Harar for at least 500 years, where they sanitise the city by feeding on its organic refuse.

The practice of regularly feeding them did not begin until the 1960s. The first to put it into practice was a farmer who began to feed hyenas in order to stop them attacking his livestock, with his descendants having continued the practice. Some of the hyena men give each hyena a name they respond to, and call to them using a “hyena dialect”, a mixture of English and Oromo. The hyena men feed the hyenas by mouth, using pieces of raw meat provided by spectators. Tourists usually organize to watch the spectacle through a guide for a negotiable rate. As of 2002, the practice is considered to be on the decline, with only two practicing hyena men left in Harar. 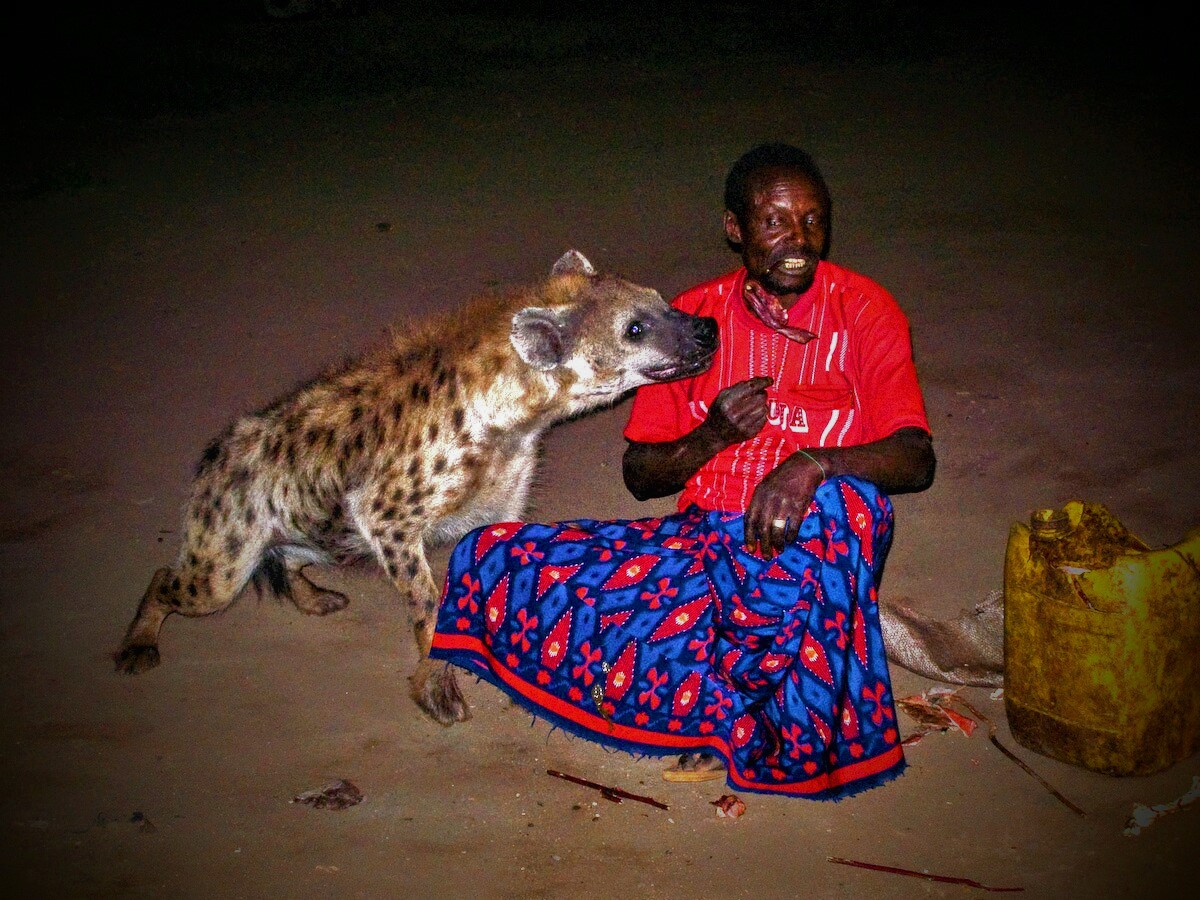 According to local folklore, the feeding of hyenas in Harar originated during a 19th-century famine, during which the starving hyenas began to attack livestock and humans. In one version of the story, a pure-hearted man dreamed of how the Hararis could placate the hyenas by feeding them porridge, and successfully put it into practice, while another credits the revelation to the town’s Muslim saints convening on a mountaintop. The anniversary of this pact is celebrated every year on the Day of Ashura, when the hyenas are provided with porridge prepared with pure butter. It is believed that during this occasion, the hyenas’ clan leaders taste the porridge before the others. Should the porridge not be to the lead hyenas’ liking, the other hyenas will not eat it, and those in charge of feeding them make the requested improvements. The manner in which the hyenas eat the porridge on this occasion are believed to have oracular significance; if the hyena eats more than half the porridge, then it is seen as portending a prosperous new year. Should the hyena refuse to eat the porridge or eat all of it, then the people will gather in shrines to pray, in order to avert famine or pestilence.

Marcus Baynes-Rock went to Harar to learn about this. He wound up becoming friends with a pack of hyenas:

He would play with them and run with them through the city streets at night. In the end he ‘went native’: he would even be startled, like the hyenas, when they came across a human being!

To get a feeling for this, I think you have to either read his book or listen to this:

Nearer the beginning of this quest, he wrote this:

The Old Town of Harar in eastern Ethiopia is enclosed by a wall built 500 years ago to protect the town’s inhabitants from hostile neighbours after a religious conflict that destabilised the region. Historically, the gates would be opened every morning to admit outsiders into the town to buy and sell goods and perhaps worship at one of the dozens of mosques in the Muslim city. Only Muslims were allowed to enter. And each night, non-Hararis would be evicted from the town and the gates locked. So it is somewhat surprising that this endogamous, culturally exclusive society incorporated holes into its defensive wall, through which spotted hyenas from the surrounding hills could access the town at night.

Spotted hyenas could be considered the most hated mammal in Africa. Decried as ugly and awkward, associated with witches and sorcerers and seen as contaminating, spotted hyenas are a public relations challenge of the highest order. Yet in Harar, hyenas are not only allowed into the town to clean the streets of food scraps, they are deeply embedded in the traditions and beliefs of the townspeople. Sufism predominates in Harar and at last count there were 121 shrines in and near the town dedicated to the town’s saints. These saints are said to meet on Mt Hakim every Thursday to discuss any pressing issues facing the town and it is the hyenas who pass the information from the saints on to the townspeople via intermediaries who can understand hyena language. Etymologically, the Harari word for hyena, ‘waraba’ comes from ‘werabba’ which translates literally as ‘news man’. Hyenas are also believed to clear the streets of jinn, the unseen entities that are a constant presence for people in the town, and hyenas’ spirits are said to be like angels who fight with bad spirits to defend the souls of spiritually vulnerable people.

My current research in Harar is concerned with both sides of the relationship. First is the collection of stories, traditions, songs and proverbs of which there are many and trying to understand how the most hated mammal in Africa can be accommodated in an urban environment; to understand how a society can tolerate the presence of a potentially dangerous
species. Second is to understand the hyenas themselves and their participation in the relationship. In other parts of Ethiopia, and even within walking distance of Harar, hyenas are dangerous animals and attacks on people are common. Yet, in the old town of Harar, attacks are unheard of and it is not unusual to see hyenas, in search of food scraps, wandering past perfectly edible people sleeping in the streets. This localised immunity from attack is reassuring for a researcher spending nights alone with the hyenas in Harar’s narrow streets and alleys.

But this sounds like it was written before he went native!

By the way: people have even applied network theory to friendships among spotted hyenas:

The paper is not open-access, but there’s an easy-to-read summary here:

The scientists collected more than 55,000 observations of social interactions of spotted hyenas (also known as laughing hyenas) over a 20 year period in Kenya, making this one of the largest to date of social network dynamics in any non-human species.

They found that cohesive clustering of the kind where an individual bonds with friends of friends, something scientists call ‘triadic closure,’ was the most consistent factor influencing the long-term dynamics of the social structure of these mammals.

Individual traits, such as sex and social rank, and environmental effects, such as the amount of rainfall and the abundance of prey, also matter, but the ability of individuals to form and maintain social bonds in triads was key.

“Cohesive clusters can facilitate efficient cooperation and hence maximize fitness, and so our study shows that hyenas exploit this advantage. Interestingly, clustering is something done in human societies, from hunter-gatherers to Facebook users,” said Dr Ilany, who is the lead author on the study published in the journal Ecology Letters

Hyenas, which can live up to 22 years, typically live in large, stable groups known as clans, which can comprise more than 100 individuals.

According to the scientists, hyenas can discriminate maternal and paternal kin from unrelated hyenas and are selective in their social choices, tending to not form bonds with every hyena in the clan, rather preferring the friends of their friends.

They found that hyenas follow a complex set of rules when making social decisions. Males follow rigid rules in forming bonds, whereas females tend to change their preferences over time. For example, a female might care about social rank at one time, but then later choose based on rainfall amounts.

“In spotted hyenas, females are the dominant sex and so they can be very flexible in their social preferences. Females also remain in the same clan all their lives, so they may know the social environment better,” said study co-author Dr Kay Holekamp of Michigan State University.

“In contrast, males disperse to new clans after reaching puberty, and after they disperse they have virtually no social control because they are the lowest ranking individuals in the new clan, so we can speculate that perhaps this is why they are obliged to follow stricter social rules.”

For a program to measure triadic closure, click on the picture:

This entry was posted on Saturday, January 30th, 2016 at 1:00 am and is filed under biology. You can follow any responses to this entry through the RSS 2.0 feed. You can leave a response, or trackback from your own site.

4 Responses to Among the Bone Eaters