Category theory reduces a large chunk of math to the clever manipulation of arrows. One of the fun things about this is that you can often take a familiar mathematical construction, think of it category-theoretically, and just turn around all the arrows to get something new and interesting!

In math we love functions. If we have a function

we can formally turn around the arrow to think of

as something going back from

. But this something is usually not a function: it’s called a ‘cofunction’. A cofunction from

is simply a function from

Cofunctions are somewhat interesting, but they’re really just functions viewed through a looking glass, so they don’t give much new—at least, not by themselves.

The game gets more interesting if we think of functions and cofunctions as special sorts of relations. A relation from

It’s a function when for each

It’s a cofunction when for each

and get a relation

Of course, relations also have certain disadvantages compared to functions. But it’s utterly clear by now that the category

where the objects are finite sets and the morphisms are relations, is very important.

So far, so good. But what happens if we take the definition of ‘relation’ and turn all the arrows around?

There are actually several things I could mean by this question, some more interesting than others. But one of them gives a very interesting new concept: the concept of ‘corelation’. And two of my students have just written a very nice paper on corelations:

Here’s why this paper is important for network theory: corelations between finite sets are exactly what we need to describe electrical circuits made of ideal conductive wires! A corelation from a finite set

to a finite set

can be drawn this way:

I have drawn more wires than strictly necessary: I’ve drawn a wire between two points whenever I want current to be able to flow between them. But there’s a reason I did this: a corelation from

simply tells us when current can flow from one point in either of these sets to any other point in these sets.

Of course circuits made solely of conductive wires are not very exciting for electrical engineers. But in an earlier paper, Brendan introduced corelations as an important stepping-stone toward more general circuits:

The key point is simply that you use conductive wires to connect resistors, inductors, capacitors, batteries and the like and build interesting circuits—so if you don’t fully understand the math of conductive wires, you’re limited in your ability to understand circuits in general!

In their new paper, Brendan teamed up with Brandon Coya, and they figured out all the rules obeyed by the category

where the objects are finite sets and the morphisms are corelations. I’ll explain these rules later.

This sort of analysis had previously been done for

and it turns out there’s a beautiful analogy between the two cases! Here is a chart displaying the analogy:

I’m sure this will be cryptic to the nonmathematicians reading this, and even many mathematicians—but the paper explains what’s going on here.

But first, let’s talk about something simpler.

What is a corelation?

Just as we can define functions as relations of a special sort, we can also define relations in terms of functions. A relation from

Why an equivalence class? The image of

is our desired subset of

here could be replaced by any isomorphic set; its only role is to provide ‘names’ for the elements of

that are in the image of

Now we have a relation described as an arrow, or really an equivalence class of arrows. Next, let’s turn the arrow around!

There are different things I might mean by that, but we want to do it cleverly. When we turn arrows around, the concept of product (for example, cartesian product

of sets) turns into the concept of sum (for example, disjoint union

So, we should define a corelation from a set

to be an equivalence class of onto functions

Why an equivalence class? The set

here could be replaced by any isomorphic set; its only role is to provide ‘names’ for the sets of elements of

that get mapped to the same thing via

is just a partition of the disjoint union

If we like, we can then draw a line connecting any two points that lie in the same part of the partition:

These lines determine the corelation, so we can also draw a corelation this way:

This is why corelations describe circuits made solely of wires!

The main result in Brandon and Brendan’s paper is that

is equivalent to the PROP for extraspecial commutative Frobenius monoids. That’s a terse way of the laws governing

Let me just show you the most important laws. In each of these law I’ll draw two circuits made of wires, and write an equals sign asserting that they give the same corelation from a set

of each circuit are on top, and the outputs

are at the bottom. I’ll draw 3-way junctions as little triangles, but don’t worry about that. When we compose two corelations we may get a wire left in mid-air, not connected to the inputs or outputs. We draw the end of the wire as a little circle.

There are some laws called the ‘commutative monoid’ laws:

Then we have ‘Frobenius laws’:

and finally we have the ‘special’ and ‘extra’ laws:

All other laws can be derived from these in some systematic ways.

Commutative Frobenius monoids obey the commutative monoid laws, the cocommutative comonoid laws and the Frobenius laws. They play a fundamental role in 2d topological quantum field theory. Special Frobenius monoids are also well-known. But the ‘extra’ law, which says that a little piece of wire not connected to anything can be thrown away with no effect, is less well studied. Jason Erbele and I gave it this name in our work on control theory:

is a subset of

is a partition of

There’s a lattice of subsets of a set: 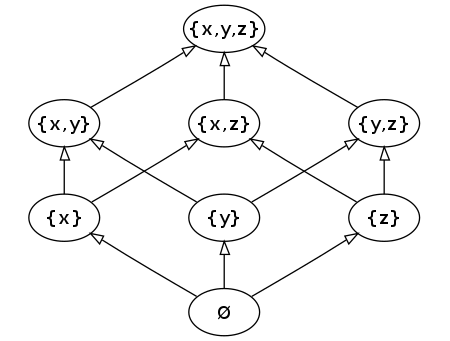 In logic these subsets correspond to propositions, and the lattice operations are the logical operations ‘and’ and ‘or’. But there’s also a lattice of partitions of a set: 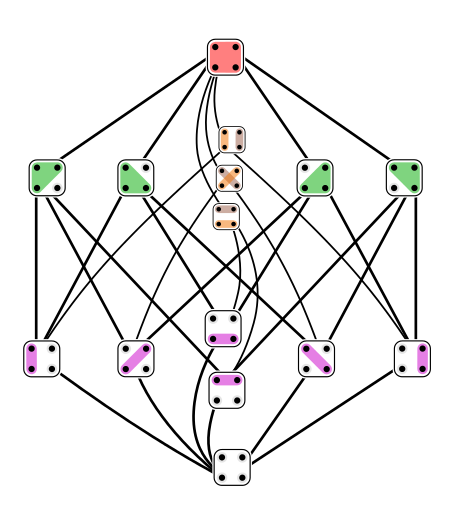 In Ellerman’s vision, this lattice of partitions gives a new kind of logic. You can read about it here:

As mentioned, the main result in Brandon and Brendan’s paper is that

is equivalent to the PROP for extraspecial commutative Frobenius monoids. After they proved this, they noticed that the result has also been stated in other language and proved in other ways by two other authors:

Unsurprisingly, I prefer Brendan and Brandon’s approach to deriving the result. But it’s nice to see different perspectives!

This entry was posted on Tuesday, February 2nd, 2016 at 2:00 am and is filed under mathematics, networks. You can follow any responses to this entry through the RSS 2.0 feed. You can leave a response, or trackback from your own site.

16 Responses to Corelations in Network Theory