They have the largest ratio of wing area to body weight of any bird. This lets them fly very long distances while only rarely flapping their wings. They often stay in the air for weeks at time. And one being tracked by satellite in the Indian Ocean stayed aloft for two months.

Surprisingly for sea birds, they don’t go into the water. Their feathers aren’t waterproof. They are true creatures of the air. They snatch fish from the ocean surface using their long, hooked bills—and they often eat flying fish! They clean themselves in flight by flying low and wetting themselves at the water’s surface before preening themselves.

They live a long time: often over 35 years.

But here’s the cool new discovery:

Since the frigatebird spends most of its life at sea, its habits outside of when it breeds on land aren’t well-known—until researchers started tracking them around the Indian Ocean. What the researchers discovered is that the birds’ flying ability almost defies belief.

Ornithologist Henri Weimerskirch put satellite tags on a couple of dozen frigatebirds, as well as instruments that measured body functions such as heart rate. When the data started to come in, he could hardly believe how high the birds flew.

“First, we found, ‘Whoa, 1,500 meters. Wow. Excellent, fantastique,’ ” says Weimerskirch, who is with the National Center for Scientific Research in Paris. “And after 2,000, after 3,000, after 4,000 meters — OK, at this altitude they are in freezing conditions, especially surprising for a tropical bird.”

Four thousand meters is more than 12,000 feet, or as high as parts of the Rocky Mountains. “There is no other bird flying so high relative to the sea surface,” he says.

Weimerskirch says that kind of flying should take a huge amount of energy. But the instruments monitoring the birds’ heartbeats showed that the birds weren’t even working up a sweat. (They wouldn’t, actually, since birds don’t sweat, but their heart rate wasn’t going up.)

How did they do it? By flying into a cloud.

“It’s the only bird that is known to intentionally enter into a cloud,” Weimerskirch says. And not just any cloud—a fluffy, white cumulus cloud. Over the ocean, these clouds tend to form in places where warm air rises from the sea surface. The birds hitch a ride on the updraft, all the way up to the top of the cloud.

“Absolutely incredible,” says Curtis Deutsch, an oceanographer at the University of Washington. “They’re doing it right through these cumulus clouds. You know, if you’ve ever been on an airplane, flying through turbulence, you know it can be a little bit nerve-wracking.”

One of the tagged birds soared 40 miles without a wing-flap. Several covered more than 300 miles a day on average, and flew continuously for weeks.

• Christopher Joyce, Nonstop flight: how the frigatebird can soar for weeks without stopping, All Things Considered, National Public Radio, 30 June 2016.

Frigatebirds aren’t admirable in every way. They’re kleptoparasites—now there’s a word you don’t hear every day! That’s a name for animals that steal food:

Frigatebirds will rob other seabirds such as boobies, particularly the red-footed booby, tropicbirds, shearwaters, petrels, terns, gulls and even ospreys of their catch, using their speed and maneuverability to outrun and harass their victims until they regurgitate their stomach contents. They may either assail their targets after they have caught their food or circle high over seabird colonies waiting for parent birds to return laden with food. 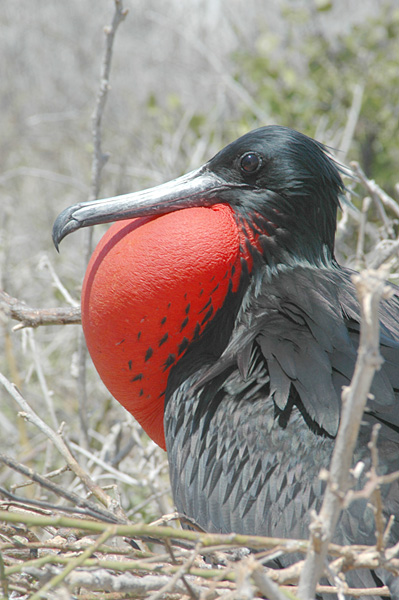 This entry was posted on Monday, July 18th, 2016 at 1:16 pm and is filed under biology. You can follow any responses to this entry through the RSS 2.0 feed. You can leave a response, or trackback from your own site.