This week I’m giving a talk on biology and information:

• John Baez, Biology as information dynamics, talk for Biological Complexity: Can it be Quantified?, a workshop at the Beyond Center, 2 February 2017.

While preparing this talk, I discovered a cool fact. I doubt it’s new, but I haven’t exactly seen it elsewhere. I came up with it while trying to give a precise and general statement of ‘Fisher’s fundamental theorem of natural selection’. I won’t start by explaining that theorem, since my version looks rather different than Fisher’s, and I came up with mine precisely because I had trouble understanding his. I’ll say a bit more about this at the end.

The square of the rate at which a population learns information is the variance of its fitness.

This is a nice advertisement for the virtues of diversity: more variance means faster learning. But it requires some explanation!

Let’s start by assuming we have

As usual, these could be all sorts of things:

is a function of time that grows at a rate equal to this population times its ‘fitness’. I explained the resulting equation back in Part 9, but it’s pretty simple:

is a completely arbitrary smooth function of all the populations! We call it the fitness of the ith species.

This equation is important, so we want a short way to write it. I’ll often write

With these abbreviations, which any red-blooded physicist would take for granted, our equation becomes simply this:

be the probability that a randomly chosen organism is of the ith species:

Starting from our equation describing how the populations evolve, we can figure out how these probabilities evolve. The answer is called the replicator equation:

is the average fitness of all the replicators, or mean fitness:

In what follows I’ll abbreviate the replicator equation as follows:

Okay, now let’s figure out how fast the probability distribution

changes with time. For this we need to choose a way to measure the length of the vector

And here information geometry comes to the rescue! We can use the Fisher information metric, which is a Riemannian metric on the space of probability distributions.

I’ve talked about the Fisher information metric in many ways in this series. The most important fact is that as a probability distribution

changes with time, its speed

are two tangent vectors to the point

in the space of probability distributions. Then the Fisher information metric is given as follows:

Using this we can calculate the speed at which

moves when it obeys the replicator equation. Actually the square of the speed is simpler: 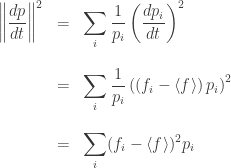 The answer has a nice meaning, too! It’s just the variance of the fitness: that is, the square of its standard deviation.

So, if you’re willing to buy my claim that the speed

“The rate of increase in fitness of any organism at any time is equal to its genetic variance in fitness at that time.”

Or in more modern terminology:

“The rate of increase in the mean fitness of any organism at any time ascribable to natural selection acting through changes in gene frequencies is exactly equal to its genetic variance in fitness at that time”.

Largely as a result of Fisher’s feud with the American geneticist Sewall Wright about adaptive landscapes, the theorem was widely misunderstood to mean that the average fitness of a population would always increase, even though models showed this not to be the case. In 1972, George R. Price showed that Fisher’s theorem was indeed correct (and that Fisher’s proof was also correct, given a typo or two), but did not find it to be of great significance. The sophistication that Price pointed out, and that had made understanding difficult, is that the theorem gives a formula for part of the change in gene frequency, and not for all of it. This is a part that can be said to be due to natural selection

I don’t find it very clear, perhaps because I didn’t spend enough time on it. But I think I get the idea.

My result is a theorem in the mathematical sense, though quite an easy one. I assume a population distribution evolves according to the replicator equation and derive an equation whose right-hand side matches that of Fisher’s original equation: the variance of the fitness.

But my left-hand side is different: it’s the square of the speed of the corresponding probability distribution, where speed is measured using the ‘Fisher information metric’. This metric was discovered by the same guy, Ronald Fisher, but I don’t think he used it in his work on the fundamental theorem!

Something a bit similar to my statement appears as Theorem 2 of this paper:

and for that theorem he cites:

However, his Theorem 2 really concerns the rate of increase of fitness, like Fisher’s fundamental theorem. Moreover, he assumes that the probability distribution

flows along the gradient of a function, and I’m not assuming that. Indeed, my version applies to situations where the probability distribution moves round and round in periodic orbits!

moves, rather than the increase in fitness. Why do I call this speed the ‘rate at which the population learns information’? It’s because we’re measuring this speed using the Fisher information metric, which is closely connected to relative information, also known as relative entropy or the Kullback–Leibler divergence.

I explained this back in Part 7, but that explanation seems hopelessly technical to me now, so here’s a faster one, which I created while preparing my talk.

The information of a probability distribution

relative to a probability distribution

saying that the probability of the ith situation was

and then update this to a new hypothesis

Now suppose you have a hypothesis that’s changing with time in a smooth way, given by a time-dependent probability

Then a calculation shows that

. This seems paradoxical at first. I like to jokingly put it this way:

However, as long as the velocity

is nonzero, we have

so we can say

To second order, you’re always learning something… unless your opinions are fixed.

This lets us define a ‘rate of learning’—that is, a ‘speed’ at which the probability distribution

moves. And this is precisely the speed given by the Fisher information metric!

This entry was posted on Wednesday, February 1st, 2017 at 1:18 am and is filed under biology, game theory, information and entropy, probability. You can follow any responses to this entry through the RSS 2.0 feed. You can leave a response, or trackback from your own site.