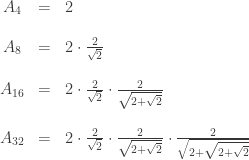 45 Responses to Pi and the Golden Ratio