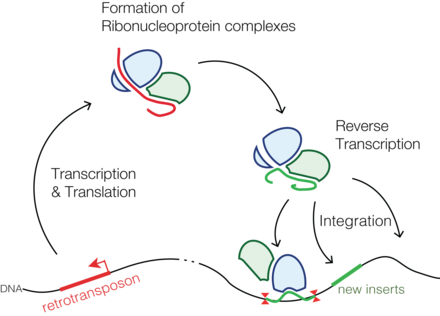 This article is very interesting:

Your brain needs a protein called Arc. If you have trouble making this protein, you’ll have trouble forming new memories. The neuroscientist Jason Shepherd noticed something weird:

He saw that these Arc proteins assemble into hollow, spherical shells that look uncannily like viruses. “When we looked at them, we thought: What are these things?” says Shepherd. They reminded him of textbook pictures of HIV, and when he showed the images to HIV experts, they confirmed his suspicions. That, to put it bluntly, was a huge surprise. “Here was a brain gene that makes something that looks like a virus,” Shepherd says.

That’s not a coincidence. The team showed that Arc descends from an ancient group of genes called gypsy retrotransposons, which exist in the genomes of various animals, but can behave like their own independent entities. They can make new copies of themselves, and paste those duplicates elsewhere in their host genomes. At some point, some of these genes gained the ability to enclose themselves in a shell of proteins and leave their host cells entirely. That was the origin of retroviruses—the virus family that includes HIV.

It’s worth pointing out that gypsy is the name of a specific kind of retrotransposon. A retrotransposon is a gene that can make copies of itself by first transcribing itself from DNA into RNA and then converting itself back into DNA and inserting itself at other places in your chromosomes.

About 40% of your genes are retrotransposons! They seem to mainly be ‘selfish genes’, focused on their own self-reproduction. But some are also useful to you.

So, Arc genes are the evolutionary cousins of these viruses, which explains why they produce shells that look so similar. Specifically, Arc is closely related to a viral gene called gag, which retroviruses like HIV use to build the protein shells that enclose their genetic material. Other scientists had noticed this similarity before. In 2006, one team searched for human genes that look like gag, and they included Arc in their list of candidates. They never followed up on that hint, and “as neuroscientists, we never looked at the genomic papers so we didn’t find it until much later,” says Shepherd.

I love this because it confirms my feeling that viruses are deeply entangled with our evolutionary past. Computer viruses are just the latest phase of this story.

As if that wasn’t weird enough, other animals seem to have independently evolved their own versions of Arc. Fruit flies have Arc genes, and Shepherd’s colleague Cedric Feschotte showed that these descend from the same group of gypsy retrotransposons that gave rise to ours. But flies and back-boned animals co-opted these genes independently, in two separate events that took place millions of years apart. And yet, both events gave rise to similar genes that do similar things: Another team showed that the fly versions of Arc also sends RNA between neurons in virus-like capsules. “It’s exciting to think that such a process can occur twice,” says Atma Ivancevic from the University of Adelaide.

This is part of a broader trend: Scientists have in recent years discovered several ways that animals have used the properties of virus-related genes to their evolutionary advantage. Gag moves genetic information between cells, so it’s perfect as the basis of a communication system. Viruses use another gene called env to merge with host cells and avoid the immune system. Those same properties are vital for the placenta—a mammalian organ that unites the tissues of mothers and babies. And sure enough, a gene called syncytin, which is essential for the creation of placentas, actually descends from env. Much of our biology turns out to be viral in nature.

Here’s something I wrote in 1998 when I was first getting interested in this business:

RNA reverse transcribing viruses are usually called retroviruses. They have a single-stranded RNA genome. They infect animals, and when they get inside the cell’s nucleus, they copy themselves into the DNA of the host cell using reverse transcriptase. In the process they often cause tumors, presumably by damaging the host’s DNA.

Retroviruses are important in genetic engineering because they raised for the first time the possibility that RNA could be transcribed into DNA, rather than the reverse. In fact, some of them are currently being deliberately used by scientists to add new genes to mammalian cells.

Retroviruses are also important because AIDS is caused by a retrovirus: the human immunodeficiency virus (HIV). This is part of why AIDS is so difficult to treat. Most usual ways of killing viruses have no effect on retroviruses when they are latent in the DNA of the host cell.

From an evolutionary viewpoint, retroviruses are fascinating because they blur the very distinction between host and parasite. Their genome often contains genetic information derived from the host DNA. And once they are integrated into the DNA of the host cell, they may take a long time to reemerge. In fact, so-called endogenous retroviruses can be passed down from generation to generation, indistinguishable from any other cellular gene, and evolving along with their hosts, perhaps even from species to species! It has been estimated that up to 1% of the human genome consists of endogenous retroviruses! Furthermore, not every endogenous retrovirus causes a noticeable disease. Some may even help their hosts.

It gets even spookier when we notice that once an endogenous retrovirus lost the genes that code for its protein coat, it would become indistinguishable from a long terminal repeat (LTR) retrotransposon—one of the many kinds of “junk DNA” cluttering up our chromosomes. Just how much of us is made of retroviruses? It’s hard to be sure.

For my whole article, go here:

It’s about the mysterious subcellular entities that stand near the blurry border between the living and the non-living—like viruses, viroids, plasmids, satellites, transposons and prions. I need to update it, since a lot of new stuff is being discovered!

Jason Shepherd’s new paper has a few other authors:

This entry was posted on Sunday, January 14th, 2018 at 6:28 pm and is filed under biology. You can follow any responses to this entry through the RSS 2.0 feed. You can leave a response, or trackback from your own site.