and this is a great explanation of how it shows up in chemistry:

Suppose we have a bunch of chemical reactions. For example, just one:

with its rate constant

and the reverse reaction

with its rate rate constant

Then as I recently explained, these reactions are in a detailed balanced equilibrium when

This says the forward reaction is happening at the same rate as the reverse reaction.

Note: we have three variables, the concentrations

and they obey a polynomial equation. But it’s a special kind of polynomial equation! It just says that one monomial—a product of variables, times a constant—equals another monomial. That’s the kind of equation that’s allowed in toric geometry.

Let’s look at another example:

Now we have a detailed balance equilibrium when

Again, one monomial equals another monomial.

Now let’s look at a bigger reaction network, formed by combining the two so far:

Detailed balance is a very strong condition: it says that each reaction is occurring at the same rate as its reverse. So, it happens when

So, we can have more than one equation, but all of them simply equate two monomials. That’s how it always works in a detailed balanced equilibrium.

Definition. An affine toric variety is a subset of

defined by a system of equations, each of which equates two monomials in the coordinates

So, if we ignore the restriction that our variables should be ≥ 0, the space of detailed balanced equilibria for a reaction network where every reaction is reversible is an affine toric variety. And the point is, there’s a lot one can say about such spaces!

A simple example of an affine toric variety is the twisted cubic, which is the subset

Here it is, as drawn by Claudio Rocchini: 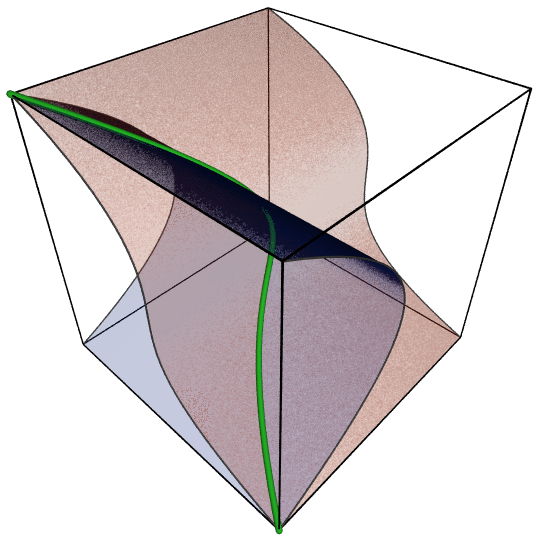 I may say more about this, but today I just wanted to get the ball rolling.

This entry was posted on Tuesday, July 3rd, 2018 at 6:20 pm and is filed under chemistry, mathematics. You can follow any responses to this entry through the RSS 2.0 feed. You can leave a response, or trackback from your own site.