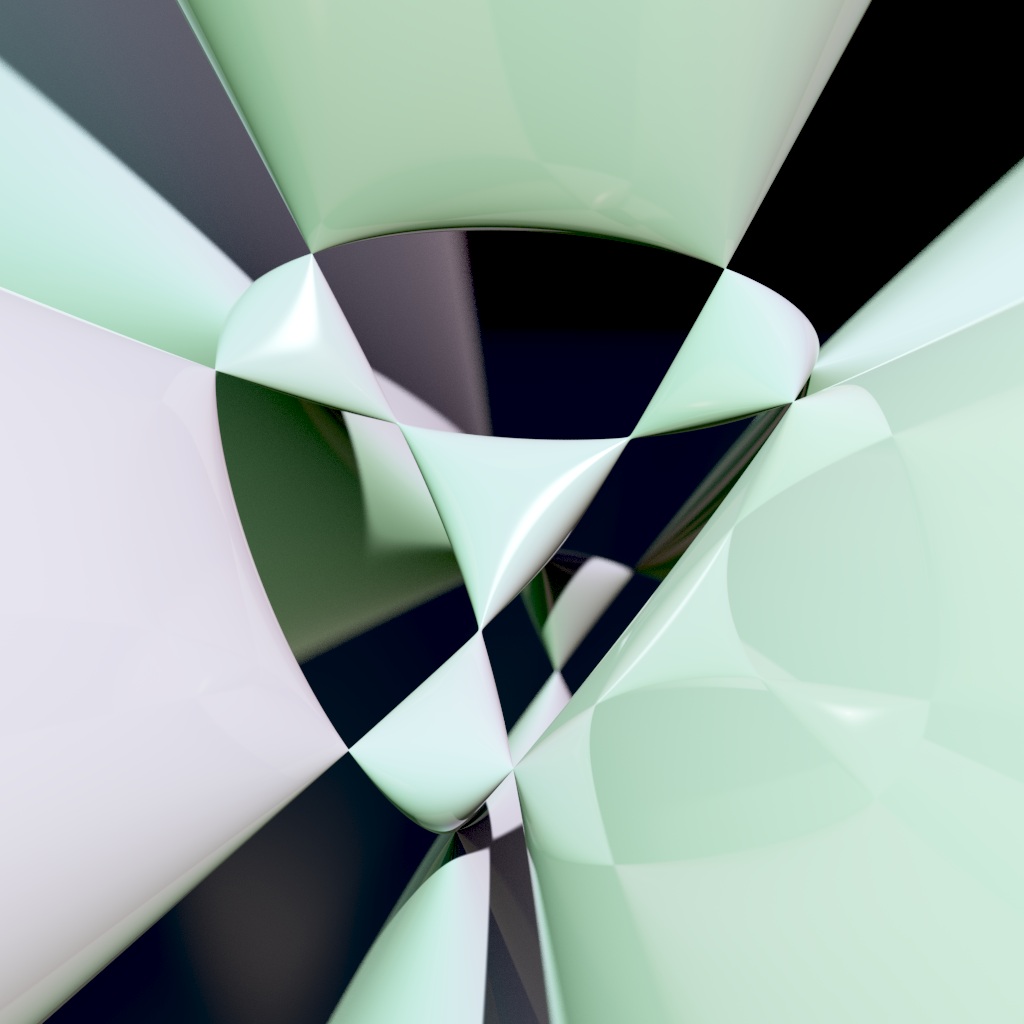 Okay, I’ll stop warming up and actually do something. I’ve secretly been trying to convince you that it’s not utterly insane to start geometric quantization with something other than a symplectic manifold—since, after all, geometric quantization normally starts with much more than a mere symplectic manifold. In Parts 1 and 2 I explained that we often start with a Kähler manifold together with a suitable line bundle. This is a big pack of data that includes a manifold that’s simultaneously symplectic, complex and Riemannian, all in a compatible way—but also more, namely the line bundle.

Now I’ll do a stripped-down, bare-bones version of geometric quantization. It starts with something that sounds quire different: a smooth complex projective variety. This is a smooth submanifold of

In fact this is not as different as it sounds: if we give

becomes a Kähler manifold! We just restrict the Fubini–Study metric to

has a god-given line bundle over it. You see, any point in

is really a line through the origin in

, and these lines define a line bundle over

This construction is so ridiculously tautological that people call the resulting bundle the tautological line bundle. This bundle has no holomorphic sections, but its dual has lots: every linear functional on

gives one, and that’s how they all arise! Let’s call this dual bundle

we get a holomorphic line bundle with enough sections to be useful in geometric quantization. Let’s call this bundle

and this line bundle

have the whole laundry list of extra structure and properties that I was bemoaning last time. As I already said,

is holomorphic. Better yet, there’s a god-given hermitian metric on

coming from the standard inner product on

(and thus its dual). So, as I explained near the end last time, we get a connection on

called the Chern connection. And if I’m not horribly mistaken, the curvature of this connection gives the symplectic structure on

at least up to those factors of

that I keep losing track of.

In short, we get everything we want to use in Kähler quantization starting from something very simple: a smooth complex projective variety!

So let’s formalize this a little. Let’s define two categories,

and make geometric quantization into a functor

I’m using a crude teletype font here because this is the first and crudest of a series of similar constructions. In fact I’ll restrain my desire to show off and do the simplest thing I can. My categories will be mere posets.

be the poset of smooth linearly normal subvarieties of

ordered by inclusion. Don’t worry—I’ll tell you what ‘linearly normal’ means in a minute. I’ll let

be the poset of linear subspaces of

You can think of any object of

as a ‘space of classical states’, since as we’ve seen it’s a symplectic manifold of a very nice kind, bedecked with all the bells and whistles we need for geometric quantization. Similarly you can think of any object of

as a ‘space of quantum states’, since as a subspace of

Here’s how the functor

works on objects. As we’ve seen, any smooth projective variety

comes with a line bundle

we form the space of holomorphic sections of

Now, this doesn’t instantly look like a subspace of

But we can identify it with one as follows. Every holomorphic section of

restricts to a holomorphic section of

is linearly normal, every holomorphic section of

arises this way! This is just the definition of ‘linearly normal’.

In this case, the space of holomorphic sections of

is a quotient of the space of holomorphic sections of

So, we’ve got a quotient space of

But by the magic of linear algebra, this corresponds to a subspace of

This sounds complicated! Luckily, when you unravel it all you get a much simpler description, pointed out by Allen Knutson in a comment to Part 1. For any variety

sits inside the projective space

We can take this as the definition of

if we want. This simpler description makes it blatantly obvious that

Now, I said in Part 1 that there’s also a reverse process going from the quantum realm back to the classical. This is even simpler: it’s ‘projectivization’, and it gives a functor

is a linear subspace of

This gives a projective variety

Since this variety is linearly normal, we can define

Sorry for the subtle difference in fonts… but it’s okay to use subtly different fonts for two things that are the same, right?

And this is obvious: a projective variety

sits inside the projectivization of some linear subspace

(Mathematicians have a tendency to say something is ‘obvious’ before reeling off a string of words no normal person would ever say.. All I mean is that no deep facts are required to see this.)

Even better, this adjunction has a special extra property:

Thanks to this extra property we say

A more familiar example of this situation is how

has a left adjoint, namely ‘abelianization’, with the special property that if we take an abelian group, forget that it’s abelian and think of it as a group, and then abelianize it, we get back the same abelian group we started with. (At least this is true up to natural isomorphism. But when we projectivize and then quantize we get back the same subspace exactly: that’s because the categories

are mere posets, where all isomorphisms are identity morphisms.)

This is all very pretty, I think. However, it would be nice to remove some of the ridiculous restrictions I’ve imposed so far, like only considering projective varieties sitting inside a fixed projective space

and only allowing inclusions as morphisms between these. That’s what I’d like to do next.

I should also note that while I’ve muttered words like ‘Hilbert space’, ‘symplectic struture’, ‘Kähler manifold’ and ‘hermitian line bundle’, my construction of the functors

did not use the inner product on

at all! That’s why I was talking about the dual space

So, all these structures involving inner products are not an intrinsic part of what’s going on—at least, not yet! But they can be slapped on at will, simply by endowing

This entry was posted on Thursday, December 27th, 2018 at 12:42 am and is filed under mathematics, physics. You can follow any responses to this entry through the RSS 2.0 feed. You can leave a response, or trackback from your own site.