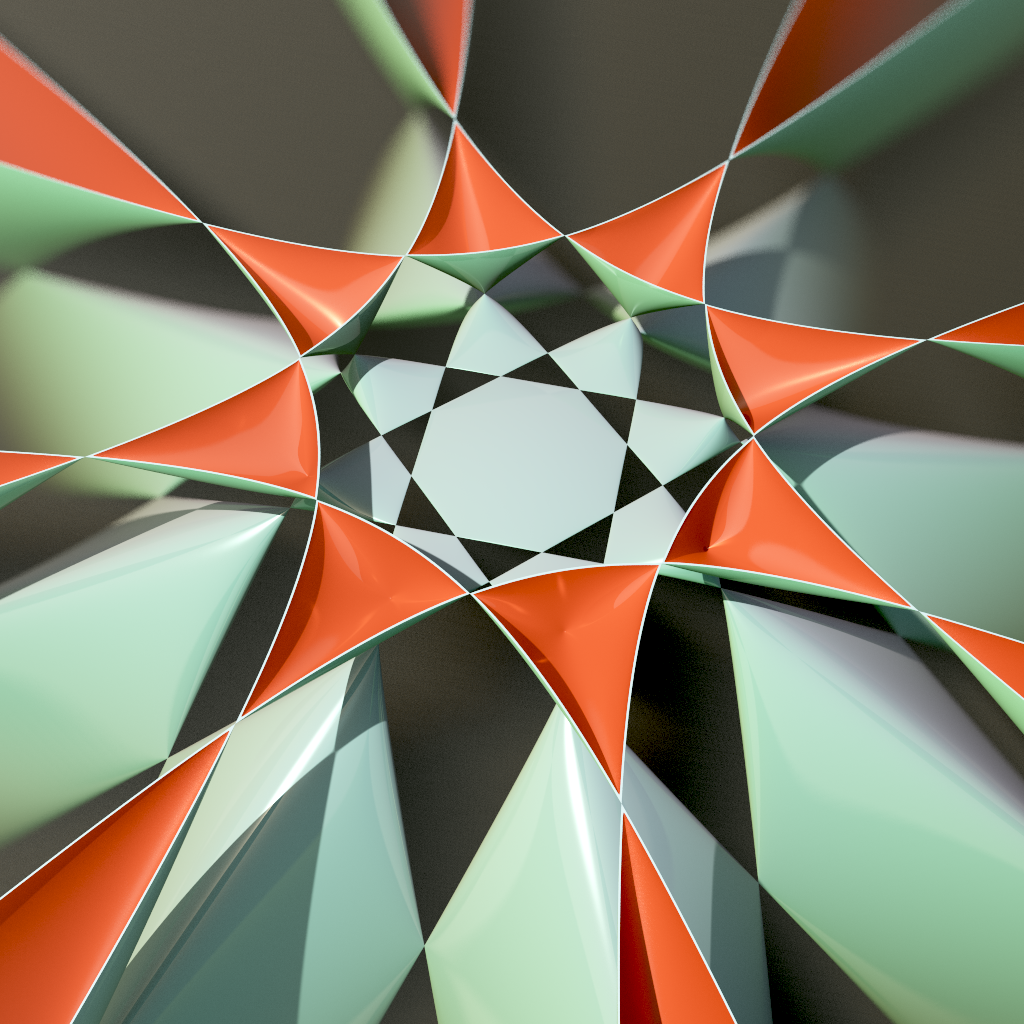 Now let’s do some more interesting examples of geometric quantization using the functor described in Part 4. Let’s look at the spin-j particle with j > 1/2.

To be specific, let’s consider the spin-3/2 particle. There’s nothing special about the number 3 here: everything I’ll say can be generalized. But the number 3 will give me a nice excuse to show you a picture of a curve called the ‘twisted cubic’.

We can build a spin-3/2 particle from three spin-1/2 particles, all having angular momenta pointing in the same direction. Classically this procedure amounts to tripling a vector, but quantum-mechanically it’s related to cubing. This is a bit mysterious to me, but let me explain.

Classically, if we take a vector of length 1/2 in

The space of such polynomials is called

and this is the space of states of the quantum spin-3/2 particle. So, we get a map

Simple! This describes the process of ‘triplicating’ the state of spin-1/2 particle and getting a spin-3/2 particle. But this is not a linear map, so it’s not a valid quantum process. As the saying goes, “you can’t clone a quantum”. Still, it’s a perfectly fine way to get our hands on lots of states of the quantum spin-3/2 particle! But not all of them, as we’ll soon see.

Geometric quantization should reconcile and combine classical and quantum mechanics. How can we do this here?

Cubing sends any line through the origin in

into a unique line through the origin in

So, we get a map from

to the projective space of

And we define the image of this map to be the space of classical states of the spin-3/2 particle!

Let’s see what it looks like. I’m thinking of an element

as a linear functional

If we cube it we get this homogeneous polynomial of degree 3:

as our basis of the homogeneous polynomials of degree 3, we can identify

If we projectivize this map we get a map between projective varieties, which I’ll call

The image of this map is the space of states of the classical spin 3/2-particle! It’s a copy of

sitting inside projective 3-space. But because cubing a nonlinear map, this copy will be twisted: not a ‘line’ but a ‘curve’. People call it the twisted cubic.

Just for kicks, let’s take a closer look at it. Let’s use homogeneous coordinates and write

for the point in

corresponding to a nonzero vector

Similarly, any point in

can be written as a nonzero 4-tuple of complex numbers with a bracket around it. We get

so the twisted cubic is

This is hard to visualize, so we can work with a copy of

namely the set where

The portion of the twisted cubic sitting in this set is

This is still hard to visualize, so we can restrict to the reals and think about the curve

This is also called the twisted cubic! People often rescale the

axis to get rid of the number 3 here.

This version of the twisted cubic is still a bit hard to visualize, but it’s the intersection of two very nice surfaces: the surface

So, the twisted cubic is the black curve:

in this nice picture uploaded to ResearchGate by Alexander M. Kasprzyk.

Okay, back to serious business! Let’s call the twisted cubic

The reason is that it’s a projective variety and it’s linearly normal. Moreover when we quantize

which is just what we want for the spin-3/2 particle!

is defined to be the smallest linear subspace

twists around so much that the smallest

that works is all of

Now let’s take stock of where we are and draw some general conclusions from what we’ve seen in this example. We now have a firm grip on the space of quantum states of the spin-3/2 particle:

and also the space of classical states of the spin-3/2 particle, the twisted cubic:

Now for something cool: the latter sits inside the projectivization of the former! This is obvious, but it has a very nice physical meaning. While I’ve been calling

the space of quantum states of the spin-3/2 particle, it is very reasonable to argue that quantum states are actually points of its projectivization,

I will skip the argument, which is old, famous and convincing:

It’s nice to say this with a bit more physics jargon. These quantum states coming from classical ones are called ‘coherent states’ . A general quantum state of the spin-3/2 particle is a ‘quantum superposition’ of these coherent states. By this, I mean that the smallest linear subspace

contains the twisted cubic is all of

And while we’ve seen this in a particular example, it’s a completely general feature of our setup! Remember, projectivization

is the left adjoint of quantization

This means that for any

We get something interesting if we take

Category theorists call this inclusion of

the ‘unit’ of our pair of adjoint functors. It says how classical states sit inside the projectivization of

If we call points of

quantum states, those in

are called the coherent states.

Moreover every quantum state is a ‘quantum superposition’ of coherent states! In other words, the smallest linear subspace

Why is this true? It’s just the definition of

So, I hope you see how much physics is packed into these adjoint functors

I’ll do more examples next time. In the meantime, you can read more about this approach to the spin-3/2 particle here:

I was greatly inspired by this article!

This entry was posted on Tuesday, January 1st, 2019 at 12:39 am and is filed under mathematics, physics. You can follow any responses to this entry through the RSS 2.0 feed. You can leave a response, or trackback from your own site.