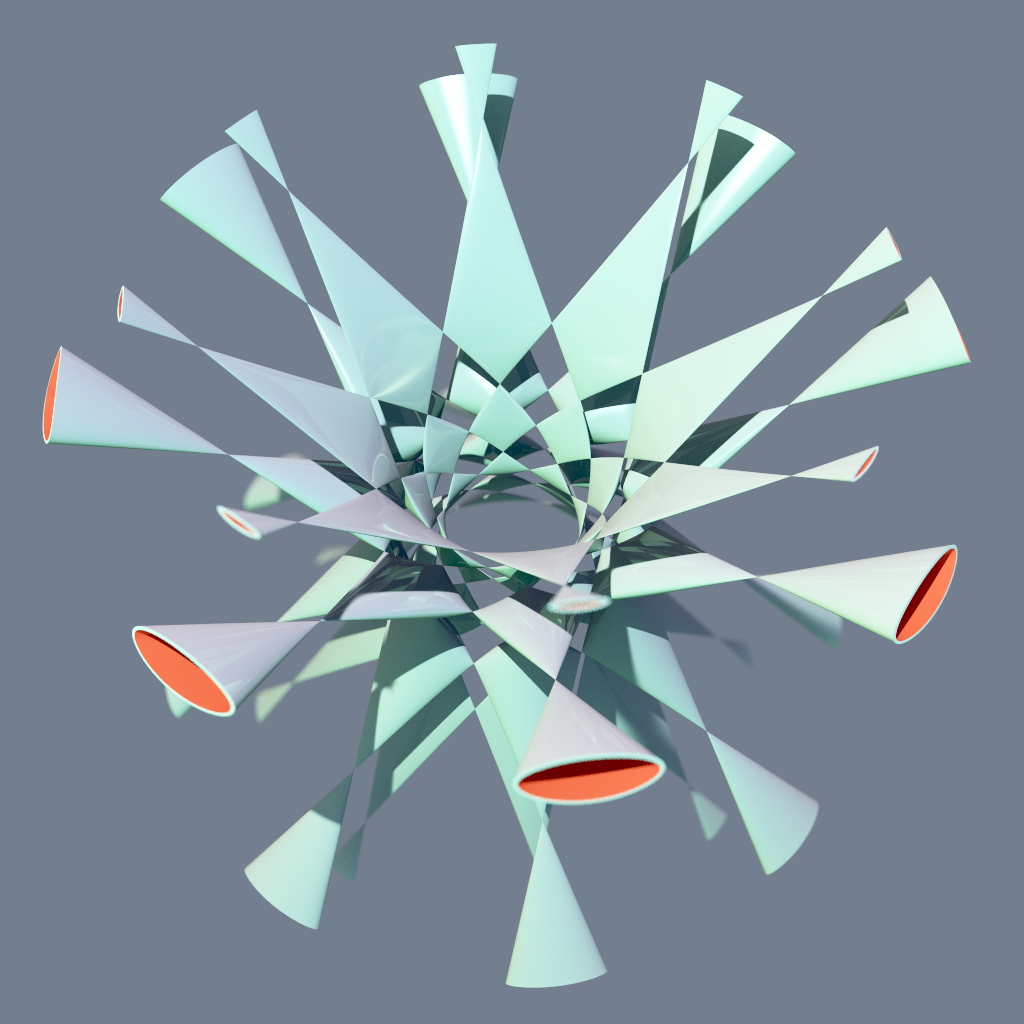 I’ve been falling in love with algebraic geometry these days, as I realize how many of its basic concepts and theorems have nice interpretations in terms of geometric quantization. I had trouble getting excited about them before. I’m talking about things like the Segre embedding, the Veronese embedding, the Kodaira embedding theorem, Chow’s theorem, projective normality, ample line bundles, and so on. In the old days, all these things used to make me nod and go “that’s nice”, without great enthusiasm. Now I see what they’re all good for!

Of course this is my own idiosyncratic take on the subject: obviously algebraic geometers have their own pefectly fine notion of what these things are good for. But I never got the hang of that.

Today I want to talk about how the Veronese embedding can be used to ‘clone’ a classical system. For any number k, you can take a classical system and build a new one; a state of this new system is k copies of the original system constrained to all be in the same state! This may not seem to do much, but it does something: for example, it multiplies the Kähler structure on the classical state space by k. And it has a quantum analogue, which has a much more notable effect!

Last time I looked at an example, where I built the spin-3/2 particle by cloning the spin-1/2 particle.

In brief, it went like this. The space of classical states of the spin-1/2 particle is the Riemann sphere,

This just happens to also be the space of quantum states of the spin-1/2 particle, since it’s the projectivization of

To get the 3/2 particle we look at the map

You can think of this as the map that ‘triplicates’ a spin-1/2 particle, creating 3 of them in the same state. This gives rise to a map between the corresponding projective spaces, which we should probably call

Algebraic geometers call the image of this embedding the twisted cubic, since it’s a curve in 3d projective space described by homogeneous cubic equations. But for us, it’s the embedding of the space of classical states of the spin-3/2 particle into the space of quantum states. (The fact that classical states give specially nice quantum states is familiar in physics, where these specially nice quantum states are called ‘coherent states’, or sometimes ‘generalized coherent states’.)

Now, you’ll have noted that the numbers 2 and 3 show up a bunch in what I just said. But there’s nothing special about these numbers! They could be arbitrary natural numbers… well, > 1 if we don’t enjoy thinking about degenerate cases.

Here’s how the generalization works. Let’s think of guys in

as linear functions on the dual of this space. We can raise any one of them to the k power and get a homogeneous polynomial of degree k. The space of such polynomials is called

so raising to the kth power defines a map

This in turn gives rise to a map between the corresponding projective spaces:

This map is an embedding, since different linear functions give different polynomials when you raise them to the k power, at least if

And this map is famous: it’s called the k Veronese embedding. I guess it’s often denoted

An important special case occurs when we take

as we’d been doing before. The space of homogeneous polynomials of degree k in two variables has dimension

so we can think of the Veronese embedding as a map

embedding the projective line as a curve in

This sort of curve is called a rational normal curve. When

it’s our friend from last time, the twisted cubic.

In general, we can think of

as the space of quantum states of the spin-k/2 particle, since we got it from projectivizing the spin-k/2 representation of

Sitting inside here, the rational normal curve is the space of classical states of the spin-k/2 particle—or in other words, ‘coherent states’.

Maybe I should expand on this, since it flew by so fast! Pick any direction you want the angular momentum of your spin-k/2 particle to point. Think of this as a point on the Riemann sphere and think of that as coming from some vector

That describes a quantum spin-1/2 particle whose angular momentum points in the desired direction. But now, form the tensor product

This is completely symmetric under permuting the factors, so we can think of it as a vector in

And indeed, it’s just what I was calling

are of this form, clearly. But those that are, are called ‘coherent states’.

Now, let’s do this all a bit more generally. We’ll work with

And we’ll use a variety

as our space of classical states, not necessarily all of

where the objects are linearly normal subvarieties

where the objects are linear subspaces

The morphisms in each case are just inclusions. We’ve got a ‘quantization’ functor

And we’ve got what you might call a ‘classicization’ functor going back:

We actually call this ‘projectization’, since it sends any linear subspace

to its projective space sitting inside

to define a functor from

and also a functor

The quantum version works just fine. Here’s how it goes. An object in

is a linear subspace

Our functor should send this to

, pronounced ‘n multichoose k’ , is the number of ways to choose k not-necessarily-distinct items from a set of n, since this is the dimension of the space of degree-k homogeneous polynomials on

(We have to pick some sort of ordering on monomials to get the isomorphism above; this is one of the clunky aspects of our current framework, which I plan to fix someday.)

This process indeed defines functor, and the only reasonable name for it is

Intuitively, it takes any state space of any quantum system and produces the state space for k indistinguishable copies that system. (If you’re a physicist, muttering the phrase ‘identical bosons’ may clarify things. There is also a fermionic version where we use exterior powers instead of symmetric powers, but let’s not go there now.)

The classical version of this functor suffers from a small glitch, which however is easy to fix. An object in

is a linearly normal subvariety

Applying the kth Veronese embedding we get a subvariety

is k-normal. You can take this as a definition of k-normality, if you like, though there are other equivalent ways to say it.

Luckily, a projectively normal subvariety of projective space is k-normal for all

So, we can redefine the category

I’m using the same notation for this new category, which is ordinarily a very dangerous thing to do, because all our results about the original version are still true for this one! In particular, we still have adjoint functors

defined exactly as before. But now the kth Veronese embedding gives a functor

Intuitively, this takes any state space of any classical system and produces the state space for k indistinguishable copies that system that are all in the same state. It has no effect on the classical state space

as an abstract variety, just its embedding into projective space—which in turn affects its Kähler structure and the line bundle it inherits from projective space. In particular, its symplectic structure gets multiplied by k, and the line bundle over it gets replaced by its kth tensor power. (These are well-known facts about the Veronese embedding.)

I believe that this functor obeys

So, very loosely, the functors

should be thought of as replacing a classical or quantum system by a new ‘cloned’ version of that system. And they get along perfectly with quantization and its adjoint, projectivization!

• Part 7: the Veronese embedding as a method of ‘cloning’ a classical system, and the symmetric tensor powers of a Hilbert space as the corresponding way to clone a quantum system.

This entry was posted on Tuesday, January 8th, 2019 at 1:53 am and is filed under mathematics, physics. You can follow any responses to this entry through the RSS 2.0 feed. You can leave a response, or trackback from your own site.