The physics of water is endlessly fascinating. The phase diagram of water at positive temperature and pressure is already remarkably complex, as shown in this diagram by Martin Chaplin:

But it turns out there’s more: water is also interesting at negative pressure.

I don’t know why I never wondered about this! But people study stretched water, essentially putting a piston of water under tension and measuring its properties.

You probably know one weird thing about water: ice floats. Unlike most liquids, water at standard pressure reaches its maximum density above the freezing point, at about 4 °C. And for any fixed pressure, you can try to find the temperature at which water reaches its maximum density. You get a curve of density maxima in the pressure-temperature plane. And with stretched water experiments, you can even study this curve for negative pressures: 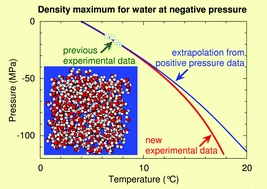 This graph is from here:

This is just the tip of the iceberg. I’m reading some papers and discovering lots of amazing things that I barely understand:

• Stacey L. Meadley and C. Austen Angell, Water and its relatives: the stable, supercooled and particularly the stretched, regimes.

I would like to learn about some of these things and explain them. But for now, let me just quote the second paper to illustrate how strange water actually is:

Water is ubiquitous and yet also unusual. It is central to life, climate, agriculture, and industry, and an understanding of its properties is key in essentially all of the disciplines of the natural sciences and engineering. At the same time, and despite its apparent molecular simplicity, water is a highly unusual substance, possessing bulk properties that differ greatly, and often qualitatively, from those of other compounds. As a consequence, water has long been the subject of intense scientific scrutiny.

In this review, we describe the development and current status of the proposal that a liquid−liquid transition (LLT) occurs in deeply supercooled water. The focus of this review is on computational work, but we also summarize the relevant experimental and theoretical background. Since first proposed in 1992, this hypothesis has generated considerable interest and debate. In particular, in the past few years several works have challenged the evidence obtained from computer simulations of the ST2 model of water that support in principle the existence of an LLT, proposing instead that what was previously interpreted as an LLT is in fact ice crystallization. This challenge to the LLT hypothesis has stimulated a significant amount of new work aimed at resolving the controversy and to better understand the nature of an LLT in water-like computer models.

Unambiguously resolving this debate, it has been shown recently that the code used in the studies that most sharply challenge the LLT hypothesis contains a serious conceptual error that prevented the authors from properly characterizing the phase behavior of the ST2 water model. Nonetheless, the burst of renewed activity focusing on simulations of an LLT in water has yielded considerable new insights. Here, we review this recent work, which clearly demonstrates that an LLT is a well-defined and readily observed phenomenon in computer simulations of water-like models and is unambiguously distinguished from the crystal−liquid phase transition.

Yes, you heard that right: a phase transition between two phases of liquid water below the freezing point!

Both these phases are metastable: pretty quickly the water will freeze. But apparently it still makes some sense to talk about phases, and a phase transition between them!

What does this have to do with stretched water? I’m not sure, but apparently understanding this stuff is connected to understanding water at negative pressures. It also involves the ‘liquid-vapor spinodal’.

The liquid-vapor spinodal is another curve in the pressure-temperature plane. As far as I can tell, it works like this: when the pressure drops below this curve, the liquid—which is already unstable: it would evaporate given time—suddenly forms bubbles of vapor.

At negative pressures the liquid-vapor spinodal has a pretty intuitive meaning: if you stretch water too much, it breaks!

There’s a conjecture due to a guy named Robin J. Speedy, which implies the liquid-vapor spinodal intersects the curve of density maxima! And it does so at negative pressures. I don’t really understand the significance of this, but it sounds cool. Super-cool.

Here’s what Palmer, Poole, Sciortino and Debenedetti have to say about this:

The development of a thermodynamically self-consistent picture of the behavior of the deeply supercooled liquid that correctly predicts these experimental observations remains at the center of research on water. While a number of competing scenarios have been advanced over the years, the fact that consensus continues to be elusive demonstrates the complexity of the theoretical problem and the difficulty of the experiments required to distinguish between scenarios.

One of the first of these scenarios, Speedy’s “stability limit conjecture” (SLC), exemplifies the challenge. As formulated by Speedy, and comprehensively analyzed by Debenedetti and D’Antonio, the SLC proposes that water’s line of density maxima in the P−T plane intersects the liquid−vapor spinodal at negative pressure. At such an intersection, thermodynamics requires that the spinodal pass through a minimum and reappear in the positive pressure region under deeply supercooled conditions. Interestingly, this scenario has recently been observed in a numerical study of model colloidal particles. The apparent power law behavior of water’s response functions is predicted by the SLC in terms of the approach to the line of thermodynamic singularities found at the spinodal.

Although the SLC has recently been shown to be thermodynamically incompatible with other features of the supercooled water phase diagram, it played a key role in the development of new scenarios. The SLC also pointed out the importance of considering the behavior of “stretched” water at negative pressure, a regime in which the liquid is metastable with respect to the nucleation of bubbles of the vapor phase. The properties of stretched water have been probed directly in several innovative experiments which continue to generate results that may help discriminate among the competing scenarios that have been formulated to explain the thermodynamic behavior of supercooled water.

This entry was posted on Saturday, October 3rd, 2020 at 12:12 am and is filed under chemistry. You can follow any responses to this entry through the RSS 2.0 feed. You can leave a response, or trackback from your own site.