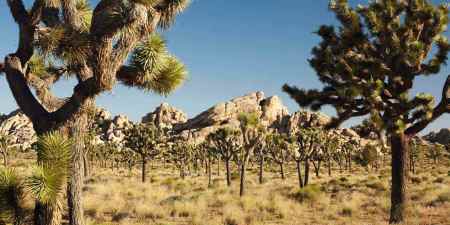 This August a fire swept through the Mojave National Preserve in southern California and killed about a million Joshua trees. Let us take a moment to mourn them, along with the ancient giant sequouias that we also lost this year.

(The article has a subheading that mistakenly says “countless ancient redwoods” also died, but the article itself does not claim this, though it has a section on coastal redwoods and the fires affecting them.)

This lavishly illustrated article talks about all three species. I’ll just quote the part on Joshua trees, since they live pretty close to here.

As photos of tourists smiling at the thermometer ricocheted around the world — a paradoxical bit of gee-whiz glee on a day portending a dire future — a million Joshua trees were on fire.

Cima Dome is a broad mound, a gentle and symmetrical arc on the vast desert horizon. It is visible from the interstate connecting Los Angeles and Las Vegas. Scientists considered it home to the world’s densest concentration of Joshua trees.

“To the untrained eye or the person not familiar with this region, most wouldn’t even notice it as they go by at 90 m.p.h.,” said Todd Esque, a desert ecologist for the United States Geological Survey. “But for those who do know, this is a huge loss.”

Joshua trees—a yucca, not a tree, named by Mormon settlers—already teeter toward trouble. Their range is shrinking, and they are not well-suited to outrun the quickening pace of climate change. Scientists worry that future visitors will find no Joshua trees in Joshua Tree National Park, the way some worry that Glacier National Park will be devoid of year-round ice.

Now wildfires, scarcely a threat historically, are taking out huge swaths at once, aided by climate change and invasive grasses.

The Dome Fire consumed 43,273 acres and killed most of the estimated 1.3 million Joshua trees it burned, according to Mr. Kaiser, the vegetation program manager for Mojave National Preserve.

“Cima Dome was a model for where the Joshua tree could persist for the next 100 years,” Mr. Kaiser said. “It was a beautiful, lush, decadent Joshua tree forest. But they’re wiped out.”

While there are plans to replant the millions of dead with thousands of young Joshua trees, “It’ll never come back like it was,” Mr. Kaiser said. “Not with climate change.”

But their range is shrinking faster than the trees can spread to more livable climes—higher in elevation and latitude, generally. The species is thwarted by slow migration (their large seeds, once transported by ground sloths that are now extinct, do not travel far from where they fall) and the overall population appears to be aging. Even at Cima Dome, there were relatively few young Joshua trees.

Those are persistent threats, too. Humans chop down Joshua trees to make room for neighborhoods, roads, even solar farms. And with Joshua trees often sharing the landscape with ranching, invasive grasses are fueling more fires than ever.

While the Dome Fire was shocking in its scope and ferocity, it was not surprising to the scientists who know the area best. “This was just a fire waiting to happen,” said Debra Hughson, chief of science and resource stewardship at Mojave National Preserve.

For more than a century, until 2002, cattle grazed on Cima Dome. Among the legacy of livestock is invasive perennial grasses like red brome. Weirdly, though, those same grasses may have helped the Joshua tree flourish.

Young Joshua trees need a nurse plant to hide under, and the prickly, woody blackbrush—unappetizing to livestock—is a perfect partner. As cattle chomped on grass, leaving vegetation sparse enough to prevent potential fires from spreading, Joshua trees took hold on Cima Dome more than in other places.

“A lot of what we were calling a year ago ‘the largest and densest Joshua Tree forest in the world’ probably didn’t exist in the early part of the 20th century,” Dr. Hughson said.

And after cattle were banned, and the invasive grasses grew uninterrupted, “It was just waiting for a spark,” she said.

The spark came in August, with a lightning strike. With resources stretched because of so many other California fires, the Dome Fire spread uncontrolled. It jumped from Joshua tree to Joshua tree and across park roads and fire lines, fueled by winds that became swirling firenados.

In two days, the blaze had done almost unimaginable damage.

“I was preparing myself for the worst,” Mr. Kaiser said as he toured the burn area. “And it pretty much was the worst.” 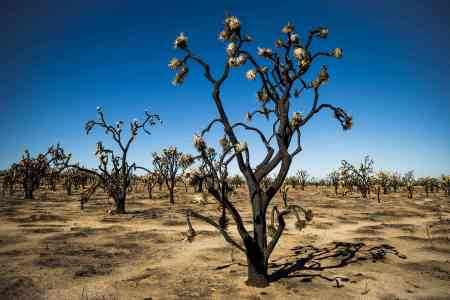 This entry was posted on Sunday, December 13th, 2020 at 2:14 am and is filed under biodiversity, climate, risks. You can follow any responses to this entry through the RSS 2.0 feed. You can leave a response, or trackback from your own site.

8 Responses to The Dome Fire