This is the Soldiers Delight Natural Environmental Area, a nature reserve in Maryland. The early colonial records of Maryland describe the area as a hunting ground for Native Americans. In 1693, rangers in the King’s service from a nearby garrison patrolled this area and named it Soldiers Delight, for some unknown reason.

It may not look like much, but that’s exactly the point! In this otherwise lush land, why does it look like nothing but grass and a few scattered trees are growing here?

It’s because this area is a serpentine barrens. Serpentine is a kind of rock: actually a class of closely related minerals which get their name from their smooth or scaly green appearance.

Soils formed from serpentine are toxic to many plants because they have lots of nickel, chromium, and cobalt! Plants are also discouraged by how these soils have little potassium and phosphorus, not much calcium, and too much magnesium. Serpentine, you see, is made of magnesium, silicon, iron, hydrogen and oxygen.

As a result, the plants that actually do well in serpentine barrens are very specialized: some small beautiful flowers, for example. Indeed, there are nature reserves devoted to protecting these! One of the most dramatic is the Tablelands of Gros Morne National Park in Newfoundland: 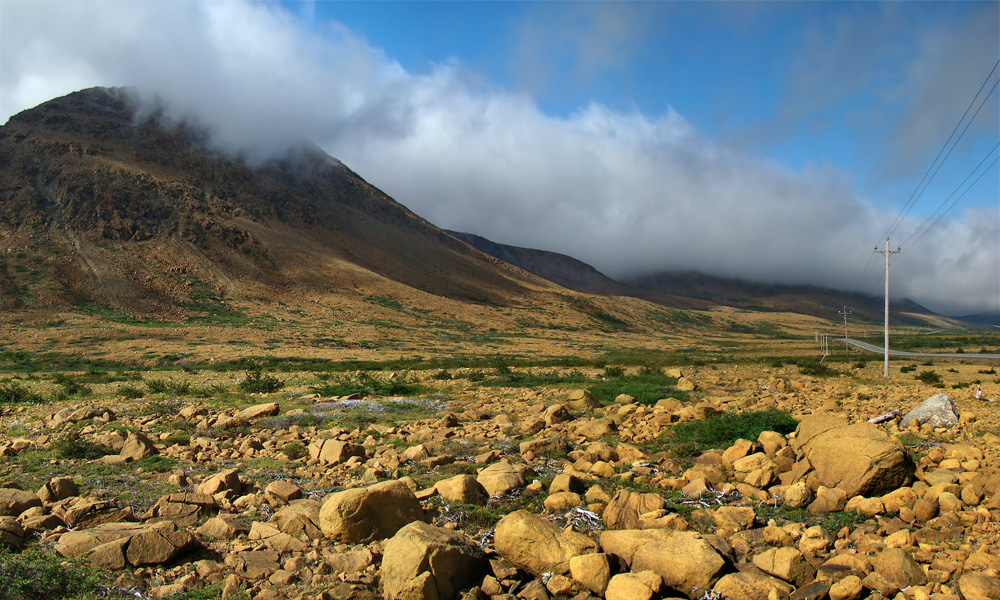 Scott Weidensaul writes this about the Tablelands:

These are hardly garden spots, and virtually no animals live here except for birds and the odd caribou passing through. Yet some plants manage to eke out a living. Balsam ragwort, a relative of the cat’s-paw ragwort of the shale barrens, has managed to cope with the toxins and can tolerate up to 12 percent of its dry weight in magnesium—a concentration that would level most flowers. Even the common pitcher-plant, a species normally associated with bogs, has a niche in this near-desert, growing along the edges of spring seeps where subsurface water brings up a little calcium. By supplementing soil nourishment with a diet of insects trapped in its upright tubes, the pitcher-plant is able to augment the Tablelands’ miserly offerings. Several other carnivorous plants, including sundews and butterwort, work the same trick on their environment.

In North America, serpentine barrens can be found in the Appalachian Mountains—Gros Morne is at the northern end of these, and further south are the Soldiers Delight Natural Environmental Area in Maryland, and the State Line Serpentine Barrens on the border of Maryland and Pennsylvania.

There are also serpentine barrens in the coastal ranges of California, Oregon, and Washington. Here are some well-adapted flowers in the Klamath-Siskiyou Mountains on the border of California and Oregon:

Unfortunately we’re putting out over 37 gigatonnes of carbon dioxide per year. To absorb all of this we’d need to grind up about 55 gigatonnes of serpentine every year, spread it around, and get it wet. There’s plenty of serpentine available, but this is over ten times the amount of worldwide cement production, so it would take a lot of work. Then there’s the question of where to put all the ground-up rock.

And now I’ve learned that serpentine poses serious challenges to the growth of plant life! It doesn’t much matter, given that nobody seems eager to fight global warming by grinding up huge amounts of this rock. But it’s interesting.

The top picture of the Soldiers Delight Natural Environmental Area was taken by someone named Veggies. The picture of serpentine was apparently taken by Kluka. The Tablelands were photographed by Tango7174. All these are on Wikicommons. The quote comes from this wonderful book:

• Scott Weidensaul, Mountains of the Heart: A Natural History of the Appalachians, Fulcrum Publishing, 2016.

The picture of flowers in the Klamath-Siskiyous was taken by Susan Erwin and appears along with many other interesting things here:

It is crystal clear when you have entered the serpentine realm. There is no mistaking it, as the vegetation shift is sharp and dramatic. Full-canopied forests become sparse woodlands or barrens sometimes in a matter of a few feet. Dwarfed trees, low-lying shrubs, grassy patches, and rock characterize the dry, serpentine uplands. Carnivorous wetlands, meadows, and Port-Orford-cedar dominated riparian areas express the water that finds its way to the surface through fractured and faulted bedrock.

For more on serpentine, serpentinization, and serpentine barrens, try this blog article:

It’s enjoyable despite its misuse of the word ‘Weltanschauung’.

This entry was posted on Friday, February 19th, 2021 at 8:06 pm and is filed under biology, geography. You can follow any responses to this entry through the RSS 2.0 feed. You can leave a response, or trackback from your own site.