Working in the Manhattan Project, Maria Goeppert Mayer discovered in 1948 that nuclei with certain numbers of protons and/or neutrons are more stable than others. In 1963 she won the Nobel prize for explaining this discovery with her ‘nuclear shell model’.

For starters one can imagine a bunch of identical fermions in a harmonic oscillator potential. In one-dimensional space we have evenly spaced energy levels, each of which holds one state if we ignore spin. I’ll write this as

But if we have spin-1/2 fermions, each of these energy levels can hold two spin states, so the numbers double:

In two-dimensional space, ignoring spin, the pattern changes to

or in other words

That is: there’s one state of the lowest possible energy, 2 states of the next energy, and so on. Including spin the numbers double:

In three-dimensional space the pattern changes to this if we ignore spin:

So, we’re getting triangular numbers! Here’s a nice picture of these states, drawn by J. G. Moxness:

Including spin the numbers double:

Wikipedia has a nice explanation of what goes wrong and how to fix it to get the next few magic numbers right:

We need to take two more effects into account. First, ‘spin-orbit interactions’ decrease the energy of a state when some spins point in the opposite direction from the orbital angular momentum. Second, the harmonic oscillator potential gets flattened out at large distances, so states of high angular momentum have less energy than you’d expect. I won’t attempt to explain the details, since Wikipedia does a pretty good job and I’m going to want breakfast soon. Here’s a picture that cryptically summarizes the analysis:

The notation is old-fashioned, from spectroscopy—you may know it if you’ve studied atomic physics, or chemistry. If you don’t know it, don’t worry about it! The main point is that the energy levels in the simple story I just told change a bit. They don’t change much until we hit the fourth magic number; then 8 of the next 20 energy levels get lowered so much that this magic number is 2+6+12+8 = 28 instead of 2+6+12+20 = 40. Things go on from there.

These are the tetrahedral numbers:

Doubling them to take spin into account, we get the first three magic numbers right! Then, alas, we get 40 instead of 28.

But we can understand some interesting features of the world using just the first three magic numbers: 2, 8, and 20.

For example, helium-4 has 2 protons and 2 neutrons, so it’s ‘doubly magic’ and very stable. It’s the second most common substance in the universe! And in radioactive decays, often a helium nucleus gets shot out. Before people knew what it was, people called it an ‘alpha particle’… and the name stuck.

Oxygen-16, with 8 protons and 8 neutrons, is also doubly magic. So is calcium-40, with 20 protons and 20 neutrons. This is the heaviest stable element with the same number of protons and neutrons! After that, the repulsive electric charge of the protons needs to be counteracted by a greater number of neutrons.

A wilder example is helium-10, with 2 protons and 8 neutrons. It’s doubly magic, but not stable. It just barely clings to existence, helped by all that magic.

Here’s one thing I didn’t explain yet, which is actually pretty easy. Why is it true that—ignoring the spin—the number of states of the harmonic oscillator in the nth energy level follows this pattern in one-dimensional space:

and this pattern in two-dimensional space:

and this pattern in three-dimensional space:

and this pattern in four-dimensional space:

So, the number of states of energy E for an n-dimensional oscillator is just the number of ways of writing E as a sum of a list of n natural numbers! The order of the list matters here: writing 3 as 1+2 counts as different than writing it as 2+1.

This leads to the patterns we’ve seen. For example, consider a harmonic oscillator in two-dimensional space. It has 1 state of energy 0, namely

It has 2 states of energy 1, namely

It has 3 states of energy 2, namely

Next, consider a harmonic oscillator in three-dimensional space. This has 1 state of energy 0, namely

It has 3 states of energy 1, namely

It has 6 states of energy 2, namely

and so on. You can check that we’re getting triangular numbers: 1, 3, 6, etc. The easiest way is to note that to get a state of energy E, the first of the three independent oscillators can have any natural number j from 0 to E as its energy, and then there are E – j ways to choose the energies of the other two oscillators so that they sum to E – j. This gives a total of

states, and this is a triangular number.

The pattern continues in a recursive way: in four-dimensional space the same sort of argument gives us tetrahedral numbers because these are sums of triangular numbers, and so on. We’re getting the diagonals of Pascal’s triangle, otherwise known as binomial coefficients. 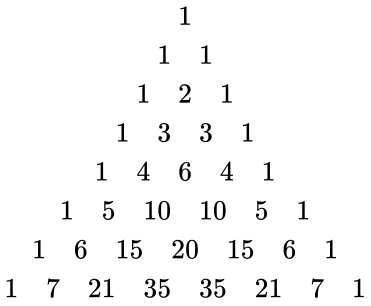 We often think of the binomial coefficient

This entry was posted on Tuesday, March 9th, 2021 at 4:55 pm and is filed under mathematics, physics. You can follow any responses to this entry through the RSS 2.0 feed. You can leave a response, or trackback from your own site.