Last time I figured out the analogue of momentum in probability theory, but I didn’t say what it’s called. Now I will tell you—thanks to some help from Abel Jansma and Toby Bartels.

This is a well-known concept in information theory. It’s also called ‘information content‘.

Let’s see why. First, let’s remember the setup. We have a manifold

are nowhere vanishing probability distributions on the set

We have a function

called the Shannon entropy, defined by

we define a cotangent vector

As mentioned last time, this is the analogue of momentum in probability theory. In the second half of this post I’ll say more about exactly why. But first let’s compute it and see what it actually equals!

Let’s start with a naive calculation, acting as if the probabilities

were a coordinate system on the manifold

so using the definition of the Shannon entropy we have

is called the surprisal of the probability distribution at

Intuitively, it’s a measure of how surprised you should be if an event of probability

Of course ‘surprise’ is a psychological term, not a term from math or physics, so we shouldn’t take it too seriously here. We can derive the concept of surprisal from three axioms:

It follows from work on Cauchy’s functional equation that

must be of this form:

the base of our logarithms, to be

We had a similar freedom of choice in defining the Shannon entropy, and we will use base

for both to be consistent. If we chose something else, it would change the surprisal and the Shannon entropy by the same constant factor.

So far, so good. But what about the irksome “-1” in our formula?

Luckily it turns out we can just get rid of this! The reason is that the probabilities

are not really coordinates on the manifold

They’re not independent: they must sum to 1. So, when we change them a little, the sum of their changes must vanish. Putting it more technically, the tangent space

is not all of

but just the subspace consisting of vectors whose components sum to zero:

is the quotient space

modulo those that vanish on vectors

Of course, we can identify the dual of

in the usual way, using the Euclidean inner product: a vector

corresponds to the linear functional

From this, you can see that a linear functional

vanishes on all vectors

if and only if its corresponding vector

In words: we can describe cotangent vectors to

as lists of n numbers if we want, but we have to remember that adding the same constant to each number in the list doesn’t change the cotangent vector!

This suggests that our naive formula

is on the right track, but we’re free to get rid of the constant 1 if we want! And that’s true.

To check this rigorously, we need to show 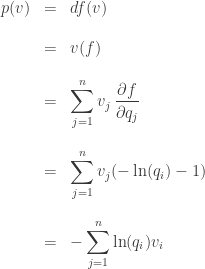 where in the second to last step we used our earlier calculation:

and in the last step we used

Back to the big picture

Now let’s take stock of where we are. We can fill in the question marks in the charts from last time, and combine those charts while we’re at it.

What’s going on here? In classical mechanics, action is minimized (or at least the system finds a critical point of the action). In thermodynamics, entropy is maximized. In the maximum entropy approach to probability, Shannon entropy is maximized. This leads to a mathematical analogy that’s quite precise. For classical mechanics and thermodynamics, I explained it here:

These posts may give a more approachable introduction to what I’m doing now: now I’m bringing probability theory into the analogy, with a big emphasis on symplectic and contact geometry.

Let me spell out a bit of the analogy more carefully:

Classical Mechanics. In classical mechanics, we have a manifold

whose points are positions of a particle. There’s an important function on this manifold: Hamilton’s principal function

is the action of the least-action path from the position

at some earlier time

at time 0. The Hamilton–Jacobi equations say the particle’s momentum

at time 0 is given by

whose points are equilibrium states of a system. The coordinates of a point

are called extensive variables. There’s an important function on this manifold: the entropy

There is a cotangent vector

Probability Theory. In probability theory, we have a manifold

whose points are nowhere vanishing probability distributions on a finite set. The coordinates of a point

are probabilities. There’s an important function on this manifold: the Shannon entropy

There is a cotangent vector

The components of this vector are the surprisals corresponding to the probabilities.

In all three cases,

is a symplectic manifold and imposing the constraint

picks out a Lagrangian submanifold

where the extra dimension comes with an extra coordinate

• action in classical mechanics,
• entropy in thermodynamics, and
• Shannon entropy in probability theory.

We can then decree that

and these constraints pick out a Legendrian submanifold

There’s a lot more to do with these ideas, and I’ll continue next time.

For all my old posts on information geometry, go here:

This entry was posted on Sunday, August 8th, 2021 at 12:56 am and is filed under information and entropy, mathematics, physics, probability. You can follow any responses to this entry through the RSS 2.0 feed. You can leave a response, or trackback from your own site.