There’s a fascinating analogy between classical mechanics and thermodynamics, which I last talked about in 2012:

I’ve figured out more about it, and today I’m giving a talk about it in the physics colloquium at the University of British Columbia. It’s a colloquium talk that’s supposed to be accessible for upper-level undergraduates, so I’ll spend a lot of time reviewing the basics… which is good, I think.

You can see my slides here, and I’ll base this blog article on them. You can also watch a video of my talk:

Hamilton’s equations versus the Maxwell relations

Why do Hamilton’s equations in classical mechanics:

look so much like the Maxwell relations in thermodynamics?

William Rowan Hamilton discovered his equations describing classical mechanics in terms of energy around 1827. By 1834 he had also introduced Hamilton’s principal function, which I’ll explain later.

James Clerk Maxwell is most famous for his equations describing electromagnetism, perfected in 1865. But he also worked on thermodynamics, and discovered the ‘Maxwell relations’ in 1871.

Hamilton’s equations describe how the position

of a particle on a line change with time

if we know the energy or Hamiltonian

Two of the Maxwell relations connect the volume

of a system in thermodynamic equilibrium:

Using this change of variables:

These are almost like two of the Maxwell relations! But in thermodynamics we always use partial derivatives:

and we say which variables are held constant:

If we write Hamilton’s equations in the same style as the Maxwell relations, they look funny:

Can this possibly be right?

Yes! When we work out the analogy between classical mechanics and thermodynamics we’ll see why.

We can get Maxwell’s relations starting from this: the internal energy

of a system in equilibrium depends on its entropy

Temperature and pressure are derivatives of

Maxwell’s relations follow from the fact that mixed partial derivatives commute! For example:

To get Hamilton’s equations the same way, we need a function

of the particle’s position

Then we’ll get Hamilton’s equations from the fact that mixed partial derivatives commute!

The trick is to let

be ‘Hamilton’s principal function’. So let’s define that. First, the action of a particle’s path is

The particle always takes a path from

that’s a critical point of the action. We can derive Hamilton’s equations from this fact.

Let’s assume this critical point is a minimum. Then the least action for any path from

A beautiful fact: if we differentiate Hamilton’s principal function, we get back the energy

You can prove these equations using

where we integrate along the minimizing path. (It’s not as trivial as it may look, but you can do it.)

for our particle, and say its path ends at any old point

. Think of Hamilton’s principal function as a function of just

Then the particle’s momentum and energy when it reaches

This is just what we wanted. Hamilton’s equations now follow from the fact that mixed partial derivatives commute!

So, we have this analogy between classical mechanics and thermodynamics:

What’s really going on in this analogy? It’s not really the match-up of variables that matters most—it’s something a bit more abstract. Let’s dig deeper.

I said we could get Maxwell’s relations from the fact that mixed partials commute, and gave one example:

But to get the other Maxwell relations we need to differentiate other functions—and there are four of them!

They’re important, but memorizing all the facts about them has annoyed students of thermodynamics for over a century. Is there some other way to get the Maxwell relations? Yes!

In 1958 David Ritchie explained how we can get all four Maxwell relations from one equation! Jaynes also explained how in some unpublished notes for a book. Here’s how it works.

Integrate around a loop

Green’s theorem implies that if a loop

But we know these are equal!

enclosed by a loop. And this in turn implies

In fact, all of Maxwell’s relations are hidden in this one equation!

a 2-form and write it as

. It’s an ‘oriented area element’, so

We can choose any coordinates

(Yes, this is mathematically allowed!)

We can actually cancel some factors and get one of the Maxwell relations:

(Yes, this is mathematically justified!)

Let’s try another one. If we take

Cancelling some factors here we get another of the Maxwell relations:

give the other two Maxwell relations.

In short, Maxwell’s relations all follow from one simple equation:

All calculations work in exactly the same way!

By the way, we can get these equations efficiently using the identity

and the product rule for

So, let’s start with

is called a symplectic structure.

, we get this 2-dimensional surface of equilibrium states:

for any region in the surface

, since on this surface

and our old argument applies.

This fact encodes the Maxwell relations! Physically it says: for any cycle on the surface of equilibrium states, the heat flow in equals the work done.

Similarly, in classical mechanics we can start with

And this fact encodes Hamilton’s equations!

In thermodynamics, any 2d region

of equilibrium states has

This is equivalent to the Maxwell relations.

In classical mechanics, any 2d region

4-tuples for particle trajectories through a single point

This is equivalent to Hamilton’s equations.

These facts generalize when we add extra degrees of freedom, e.g. the particle number

or more dimensions of space in classical mechanics:

We get a vector space

on it, and a Lagrangian submanifold

: that is, a n-dimensional submanifold such that

for any 2d region

This is more evidence for Alan Weinstein’s “symplectic creed”:

EVERYTHING IS A LAGRANGIAN SUBMANIFOLD

As a spinoff, we get two extra Hamilton’s equations for a point particle on a line! They look weird, but I’m sure they’re correct for trajectories that go through a specific arbitrary spacetime point 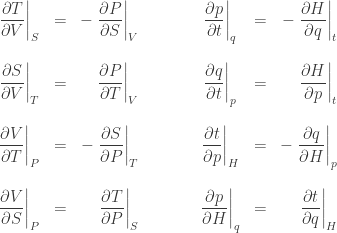 • Part 2: the role of symplectic geometry.

• Part 3: a detailed analogy between classical mechanics and thermodynamics.

• Part 4: what is the analogue of quantization for thermodynamics?

This entry was posted on Thursday, September 23rd, 2021 at 6:41 pm and is filed under mathematics, physics. You can follow any responses to this entry through the RSS 2.0 feed. You can leave a response, or trackback from your own site.