means that the ratio of the two quantities goes to

Where does this formula come from? In particular, how does the number

get involved? Where is the circle here?

To understand these things, I think a nonrigorous argument that can be made rigorous is more useful than a rigorous proof with all the ε’s dotted and the δ’s crossed. It’s important, I think, to keep the argument short. So let me do that.

The punchline will be that the

comes from this formula:

And this, I hope you know, comes from squaring both sides and converting the left side into a double integral that you can do in polar coordinates, pulling out a factor of

because the thing you’re integrating only depends on

Okay, here goes. We start with

This is easy to show using repeated integration by parts.

Next, we do this: 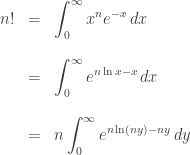 In the second we’re changing variables:

to bust things up:

All the hard work will come in showing this:

Given this, we get

and simplifying we get Stirling’s formulas:

So to prove Stirling’s formula, the big question is: how do we get

The trick is to note that as

gets big, the integral will become dominated by the point where

is as small as possible. We can then approximate the integral by a Gaussian peaked at that point!

has a critical point at

and its second derivative is

there, so it’s a local minimum. Indeed this point is the unique minimum of our function on the whole interval

Then we use this:

has a unique minimum at some point

This says that asymptotically, the integral equals what we’d get if we replaced

by the quadratic function whose value, first derivative and second derivative all match that of

With this quadratic replacing

Applying this formula to the problem at hand we get

we get what we want.

So, from this viewpoint—and there are others—the key to Stirling’s formula is Laplace’s method of approximating an integral like

You can see the whole proof of Laplace’s method here:

Physicists who have done quantum field theory will know that when push comes to shove it’s largely about Gaussian integrals. The limit

we’re seeing here is like a ‘classical limit’ where

So they will be familiar with this idea.

There should be some deeper moral here, about how

is related to a Gaussian process of some sort, but I don’t know it—even though I know how binomial coefficients approximate a Gaussian distribution. Do you know some deeper explanation, maybe in terms of probability theory and combinatorics, of why

winds up being asymptotically described by an integral of a Gaussian?

For a very nice account of some cruder versions of Stirling’s formula, try this blog article:

His ‘note’, which you can find there, will give you more intuition for why something like Stirling’s formula should be true. But I think the above argument explains the

But in math, there are always mysteries within mysteries. Gaussians show up in probability theory when we add up lots of independent and identically distributed random variables. Could that be going on here somehow?

So I don’t think we’ve gotten to the bottom of Stirling’s formula! Comments at the n-Category Café contain other guesses about what it might ‘really mean’. You can read them here. Also check out Section 3 here, which discusses many different articles on Stirling’s formula in the American Mathematical Monthly:

• Jonathan M. Borwein and Robert M. Corless, Gamma and factorial in the Monthly.

Judging by the number of articles in the Monthly on the subject, Stirling’s formula approximating n! for large n is by far the most popular aspect of the

This entry was posted on Sunday, October 3rd, 2021 at 3:05 pm and is filed under mathematics. You can follow any responses to this entry through the RSS 2.0 feed. You can leave a response, or trackback from your own site.