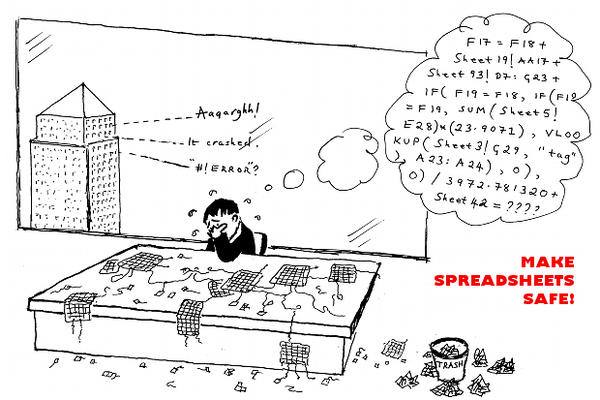 Since one goal of Azimuth is to connect mathematicians to projects that can more immediately help the world, I want to pass this on. It’s a press release put out by Jocelyn Paine, who has blogged about applied category theory on the n-Category Café. I think he’s a serious guy, so I hope we can help him out!

Spreadsheet researcher Jocelyn Ireson-Paine has launched an Indiegogo campaign to fund a project to make spreadsheets safer. It will show how to write spreadsheets that are easier to read and less error-prone than when written in Excel. This is important because spreadsheet errors have cost some companies millions of pounds, even causing resignations and share-price crashes. An error in one spreadsheet, an economic model written in 2010 by Harvard economists Carmen Reinhart and Kenneth Rogoff, has even been blamed for tax rises and public-sector cuts. If he gets funding, Jocelyn will re-engineer this spreadsheet. He hopes that, because of its notoriety, this will catch public attention.

Reinhart and Rogoff’s spreadsheet was part of a paper on the association between debt and economic growth. They concluded that in countries where debt exceeds 90% of gross domestic product, growth is notably lower. But in spring 2013, University of Massachusetts student Thomas Herndon found they had omitted data when calculating an average. Because their paper’s conclusion supported governments’ austerity programmes, much criticism followed. They even received hate email blaming them for tax rises and public-sector cuts.

Jocelyn said, “The error probably didn’t change the results much. But better software would have made the nature of the error clearer, as well as the economics calculations, thus averting ill-informed and hurtful media criticism. Indeed, it might have avoided the error altogether.”

Jocelyn’s project will use two ideas. One is “literate programming”. Normally, a programmer writes a program first, then adds comments explaining how it works. But in literate programming, the programmer becomes an essayist. He or she first writes the explanation, then inserts the calculations as if putting equations into a maths essay. In ordinary spreadsheets, you’re lucky to get any documentation at all; in literate spreadsheets, documentation comes first.

The other idea is “modularity”. This means building spreadsheets from self-contained parts which can be developed, tested, and documented independently of one another. This gives the spreadsheet’s author less to think about, making mistakes less likely. It also makes it easier to replace parts that do have mistakes.

Jocelyn has embodied these ideas in a piece of software named Excelsior. He said, “‘Excelsior’ means ‘higher’ in Latin, and ‘upwards!’ in Longfellow’s poem. I think of it as meaning ‘upwards from Excel’. In fact, though, it’s the name of a wonderful Oxford café where I used to work on my ideas.”

Jocelyn also wants to show how advanced maths benefits computing. Some of his inspiration came from a paper he found on a friend’s desk in the Oxford University Department of Computer Science. Written by professor Joseph Goguen, this used a branch of maths called category theory to elucidate what it means for something to be part of a system, and how the behaviour of a system arises from the behaviours of its parts. Jocelyn said, “The ideas in the paper were extremely general, applying to many different areas. And when you think of modules as parts, they even apply to spreadsheets. This shows the value of abstraction.”

Background information: links to all topics mentioned can be found at the end of Paine’s campaign text at

These include literate programming, modularity, the Reinhart-Rogoff spreadsheet, category theory, and many horror stories about the damage caused by spreadsheet errors.

This entry was posted on Wednesday, February 5th, 2014 at 10:59 am and is filed under computer science, software. You can follow any responses to this entry through the RSS 2.0 feed. You can leave a response, or trackback from your own site.