The Golden Ratio and the Entropy of Braids

Here’s a cute connection between topological entropy, braids, and the golden ratio. I learned about it in this paper:

I’ve talked a lot about entropy on this blog, but not much about topological entropy. This is a way to define the entropy of a continuous map

from a compact topological space

to itself. The idea is that a map that mixes things up a lot should have a lot of entropy. In particular, any map defining a ‘chaotic’ dynamical system should have positive entropy, while non-chaotic maps maps should have zero entropy.

How can we make this precise? First, cover

with finitely many open sets

Then take any point in

to it over and over, say

times, and report which open set the point lands in each time. You can record this information in a string of symbols. How much information does this string have? The easiest way to define this is to simply count the total number of strings that can be produced this way by choosing different points initially. Then, take the logarithm of this number.

Of course the answer depends on

increases. So, divide it by

and try to take the limit as

Or, to be careful, take the lim sup: this could be infinite, but it’s always well-defined. This will tell us how much new information we get, on average, each time we apply the map and report which set our point lands in.

So, take the supremum over all finite open covers. This is called the topological entropy of

Believe it or not, this is often finite! Even though the log of the number of symbol strings we get will be larger when we use a cover with lots of small sets, when we divide by

and take the limit as

this dependence often washes out.

Any braid gives a bunch of maps from the disc to itself. So, we define the entropy of a braid to be the minimum—or more precisely, the infimum—of the topological entropies of these maps.

How does a braid give a bunch of maps from the disc to itself? Imagine the disc as made of very flexible rubber. Grab it at some finite set of points and then move these points around in the pattern traced out by the braid. When you’re done you get a map from the disc to itself. The map you get is not unique, since the rubber is wiggly and you could have moved the points around in slightly different ways. So, you get a bunch of maps.

I’m being sort of lazy in giving precise details here, since the idea seems so intuitively obvious. But that could be because I’ve spent a lot of time thinking about braids, the braid group, and their relation to maps from the disc to itself!

This picture by Thiffeault and Finn may help explain the idea:

As we keep move points around each other, we keep building up more complicated braids with 4 strands, and keep getting more complicated maps from the disc to itself. In fact, these maps are often chaotic! More precisely: they often have positive entropy.

In this other picture the vertical axis represents time, and we more clearly see the braid traced out as our 4 points move around:

Each horizontal slice depicts a map from the disc (or square: this is topology!) to itself, but we only see their effect on a little rectangle drawn in black.

Okay, now for the punchline!

I should explain: any braid with 3 strands can be written as a product of generators

switches strands 1 and 2 moving the counterclockwise around each other,

does the same for strands 2 and 3, and

do the same but moving the strands clockwise.

For any braid we can write it as a product of

as small as possible, and then we can evaluate its entropy divided by

This is the right way to compare the entropy of braids, because if a braid gives a chaotic map we expect powers of that braid to have entropy growing linearly with

Now for the answer to the puzzle!

Answer 1. A 3-strand braid maximizing the entropy per generator is

And the entropy of this braid, per generator, is the logarithm of the golden ratio:

In other words, the entropy of this braid is

All this works regardless of which base we use for our logarithms. But if we use base e, which seems pretty natural, the maximum possible entropy per generator is

Or if you prefer base 2, then each time you stir around a point in the disc with this braid, you’re creating

This fact was proved here:

So, people call this braid

the golden braid. But since you can use it to generate entropy forever, perhaps it should be called the eternal golden braid.

What does it all mean? Well, the 3-strand braid group is called

, and I wrote a long story about it:

You’ll see there that

has a representation as 2 × 2 matrices:

These matrices are shears, which is connected to how the braids

give maps from the disc to itself that shear points. If we take the golden braid and turn it into a matrix using this representation, we get a matrix for which the magnitude of its largest eigenvalue is the square of the golden ratio! So, the amount of stretching going on is ‘the golden ratio per generator’.

I guess this must be part of the story too:

Puzzle 2. Is it true that when we multiply

matrices of the form

th power of the golden ratio?

There’s also a strong connection between braid groups, certain quasiparticles in the plane called Fibonacci anyons, and the golden ratio. But I don’t see the relation between these things and topological entropy! So, there is a mystery here—at least for me.

Abstract. There are many industrial situations where rods are used to stir a fluid, or where rods repeatedly stretch a material such as bread dough or taffy. The goal in these applications is to stretch either material lines (in a fluid) or the material itself (for dough or taffy) as rapidly as possible. The growth rate of material lines is conveniently given by the topological entropy of the rod motion. We discuss the problem of optimising such rod devices from a topological viewpoint. We express rod motions in terms of generators of the braid group, and assign a cost based on the minimum number of generators needed to write the braid. We show that for one cost function—the topological entropy per generator—the optimal growth rate is the logarithm of the golden ratio. For a more realistic cost function,involving the topological entropy per operation where rods are allowed to move together, the optimal growth rate is the logarithm of the silver ratio,

We show how to construct devices that realise this optimal growth, which we call silver mixers.

Here is the silver ratio: 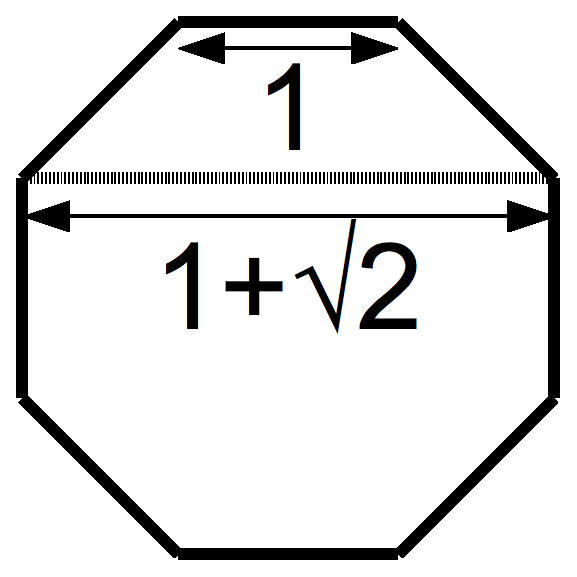 But now for some reason I feel it’s time to stop!

This entry was posted on Wednesday, November 22nd, 2017 at 4:04 pm and is filed under information and entropy, mathematics. You can follow any responses to this entry through the RSS 2.0 feed. You can leave a response, or trackback from your own site.

5 Responses to The Golden Ratio and the Entropy of Braids