It sounds like jargon from a bad episode of Star Trek. But it’s a real thing. It’s a monstrous object that lives in the plane, but is impossible to draw.

Do you want to see how snake-like it is? Okay, but beware… this video clip is a warning:

This snake-like monster is also called the ‘pseudo-arc’. It’s the limit of a sequence of curves that get more and more wiggly. Here are the 5th and 6th curves in the sequence:

But what happens if you try to draw the pseudo-arc itself, the limit of all these curves? It turns out to be infinitely wiggly—so wiggly that any picture of it is useless.

In fact Wayne Lewis and Piotr Minic wrote a paper about this, called Drawing the pseudo-arc. That’s where I got these pictures. The paper also shows stage 200, and it’s a big fat ugly black blob!

But the pseudo-arc is beautiful if you see through the pictures to the concepts, because it’s a universal snake-like continuum. Let me explain. This takes some math.

Like all point-set topology, the study of continua is considered a bit old-fashioned, because people have been working on it for so long, and it’s hard to get good new results. But on the bright side, what this means is that many great mathematicians have contributed to it, and there are lots of nice theorems. You can learn about it here:

Now, if we’re doing topology, we should really talk not about metric spaces but about metrizable spaces: that is, topological spaces where the topology comes from some metric, which is not necessarily unique. This nuance is a way of clarifying that we don’t really care about the metric, just the topology.

or the Menger sponge: 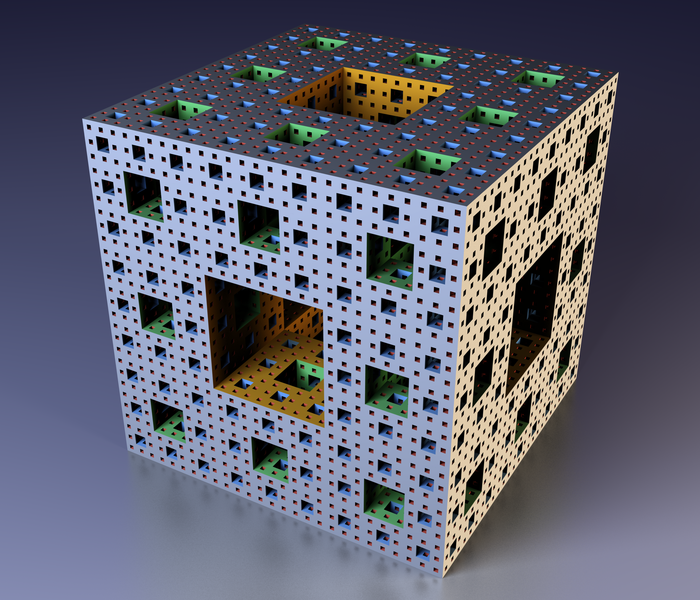 Very roughly, a continuum is ‘snake-like’ if it’s long and skinny and doesn’t loop around. But the precise definition is a bit harder:

We say that an open cover 𝒰 of a space X refines an open cover 𝒱 if each element of 𝒰 is contained in an element of 𝒱. We call a continuum X snake-like if each open cover of X can be refined by an open cover U1, …, Un such that for any i, j the intersection of Ui and Uj is nonempty iff i and j are right next to each other.

Such a cover is called a chain, so a snake-like continuum is also called chainable. But ‘snake-like’ is so much cooler: we should take advantage of any opportunity to bring snakes into mathematics!

This is a way of saying that the pseudo-arc is the most complicated snake-like continuum possible. A bit more precisely: it bends back on itself as much as possible while still going somewhere! You can see this from the pictures above, or from the construction on Wikipedia:

I like the idea that there’s a subset of the plane with this simple ‘universal’ property, which however is so complicated that it’s impossible to draw.

Here’s the paper where these pictures came from:

It takes a while to get used to this idea, since all the examples of continua that I’ve listed so far are decomposable except for the pseudo-arc and the solenoid!

Of course a single point is an indecomposable continuum, but that example is so boring that people sometimes exclude it. The first interesting example was discovered by Brouwer in 1910. It’s the intersection of an infinite sequence of sets like this:

It’s called the Brouwer–Janiszewski–Knaster continuum or buckethandle. Like the solenoid, it shows up as an attractor in some chaotic dynamical systems.

It’s easy to imagine how if you write the buckethandle as the union of two closed proper subsets, at least one will be disconnected. And note: you don’t even need these subsets to be disjoint! So, it’s an indecomposable continuum.

Apart from a single point, the pseudo-arc is the unique hereditarily indecomposable snake-like continuum! I believe this was first proved here:

Finally, here’s one more amazing fact about the pseudo-arc. To explain it, I need a bunch more nice math:

Anyway, this stuff means that there’s a metric space whose points are all subcontinua of the Hilbert cube, and we don’t miss out on any continua by looking at these. So we can call this the space of all continua.

Now for the amazing fact: pseudo-arcs are dense in the space of all continua!

I don’t know who proved this. It’s mentioned here:

but they refer to this paper as a good source for such facts:

Abstract. The pseudo-arc is the simplest nondegenerate hereditarily indecomposable continuum. It is, however, also the most important, being homogeneous, having several characterizations, and having a variety of useful mapping properties. The pseudo-arc has appeared in many areas of continuum theory, as well as in several topics in geometric topology, and is beginning to make its appearance in dynamical systems. In this monograph, we give a survey of basic results and examples involving the pseudo-arc. A more complete treatment will be given in a book dedicated to this topic, currently under preparation by this author. We omit formal proofs from this presentation, but do try to give indications of some basic arguments and construction techniques. Our presentation covers the following major topics: 1. Construction 2. Homogeneity 3. Characterizations 4. Mapping properties 5. Hyperspaces 6. Homeomorphism groups 7. Continuous decompositions 8. Dynamics.

It may seem surprising that one can write a whole book about the pseudo-arc… but if you like continua, it’s a fundamental structure just like spheres and cubes!

This entry was posted on Monday, November 27th, 2017 at 12:11 am and is filed under mathematics. You can follow any responses to this entry through the RSS 2.0 feed. You can leave a response, or trackback from your own site.

24 Responses to A Universal Snake-like Continuum