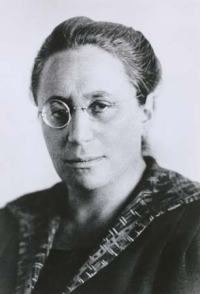 I’ve been spending the last month at the Centre of Quantum Technologies, getting lots of work done. This Friday I’m giving a talk, and you can see the slides now:

• John Baez, Getting to the bottom of Noether’s theorem.

Abstract. In her paper of 1918, Noether’s theorem relating symmetries and conserved quantities was formulated in term of Lagrangian mechanics. But if we want to make the essence of this relation seem as self-evident as possible, we can turn to a formulation in term of Poisson brackets, which generalizes easily to quantum mechanics using commutators. This approach also gives a version of Noether’s theorem for Markov processes. The key question then becomes: when, and why, do observables generate one-parameter groups of transformations? This question sheds light on why complex numbers show up in quantum mechanics.

At 5:30 on Saturday October 6th I’ll talk about this stuff at this workshop in London:

This workshop celebrates the 100th anniversary of Noether’s famous paper connecting symmetries to conserved quantities. Her paper actually contains two big theorems. My talk is only about the more famous one, Noether’s first theorem, and I’ll change my talk title to make that clear when I go to London, to avoid getting flak from experts. Her second theorem explains why it’s hard to define energy in general relativity! This is one reason Einstein admired Noether so much.

I’ll also give this talk at DAMTP—the Department of Applied Mathematics and Theoretical Physics, in Cambridge—on Thursday October 4th at 1 pm.

The organizers of London workshop on the philosophy and physics of Noether’s theorems have asked me to write a paper, so my talk can be seen as the first step toward that. My talk doesn’t contain any hard theorems, but the main point—that the complex numbers arise naturally from wanting a correspondence between observables and symmetry generators—can be expressed in some theorems, which I hope to explain in my paper. 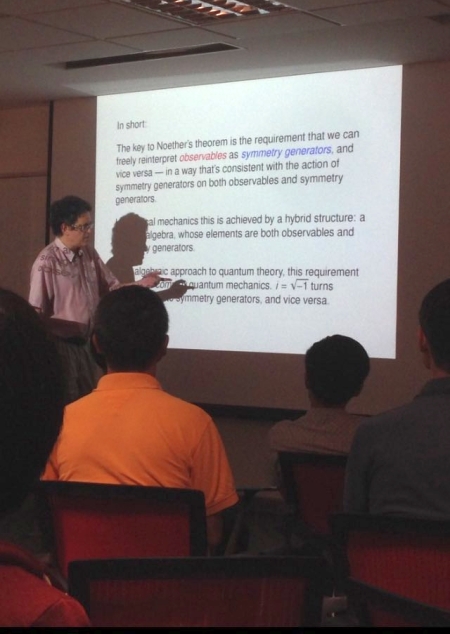 This entry was posted on Wednesday, September 12th, 2018 at 8:49 am and is filed under mathematics, physics. You can follow any responses to this entry through the RSS 2.0 feed. You can leave a response, or trackback from your own site.