This post is just for fun. I’ll start with Pascal’s triangle and show you the number e hiding inside it. Using this, we’ll see how the product of all numbers in the nth row of Pascal’s triangle is related to the nth triangular number.

But then, with a massive amount of help from Greg Egan, we’ll dig a lot deeper, and meet strange things like superfactorials, the magic properties of the number 1/12, and the Glaisher–Kinkelin constant.

First let’s get warmed up.

Pascal’s triangle is a famous and much-studied thing. It was discovered long before Pascal. It looks like this:

We write 1’s down the edges. We get every other number in the triangle by adding the two numbers above it to its left and right. People call these numbers binomial coefficients, since you can also get them like this:

here because there are 10 ways to take 5 things and choose 3 to call x’s and 2 to call y’s. In general we have

where the binomial coefficient

is the kth number on the nth row of Pascal’s triangle. Here count both rows and the numbers in a row starting from zero.

Since we can permute n things in

ways to take n things and choose k of them to be x’s and (n-k) of them to be y’s. You see, permuting the x’s or the y’s doesn’t change our choice, so we have to divide by

So, the kth number in the nth row of Pascal’s triangle is:

All this will be painfully familiar to many of you. But I want everyone to have an fair chance at understanding the next section, where we’ll see something nice about Pascal’s triangle and the number

The hidden e in Pascal’s triangle

In 2012, a guy named Harlan Brothers found the number e hiding in Pascal’s triangle… in a very simple way!

. But what if we take the product of all these numbers? Let’s call it

Then here’s what Brothers discovered:

This may seem mysterious, but in fact it’s rather simple once you see the trick. I’ll use a nice argument given by Greg Egan.

And since this is so much fun, let’s do it again! Divide this quantity by its next value:

So, this is the thing that should approach e.

If you think a bit, you’ll see:

• In the first triangle, the product of all numbers in the nth row is

• In the second, the product of all numbers in the nth row is

• In the third, the product of all numbers in the nth row is

And look—there’s a cool pattern! In the third triangle, all the numbers in any given row are equal. In the row with n numbers, all those numbers equal

So, the product of all these numbers is

But it’s a famous fact that

Some people even use this as a definition of e. So,

which is just what we wanted!

Puzzle 1. Use the formula I mentioned:

to show all the numbers in the same row of the third triangle are equal. The number of balls in a triangular stack with n balls at the bottom is called the nth triangular number,

If you chop a square of balls in half along a diagonal you get a triangle, so

is approximately half the nth square number:

But if you chop the square in half this way, the balls on the diagonal get cut in half, so to get the nth triangle number we need to include their other halves:

and they are one of the simple pleasures of life, like sunshine and good bread. Spotting them in a knight-move zigzag pattern in the multiplication table was one of my first truly mathematical experiences. You can also see them in Pascal’s triangle:

But today it’s time to see how

, the product of all the numbers in the nth row of Pascal’s triangle!

, and if we subtract each of these numbers from the one before it we get the number 1. This should remind you of something we’ve seen:

Here we’re dividing instead of subtracting. But if take logarithms, we’ll be subtracting, and we get

What can we do with this? Well, suppose

were equal to 1, instead of approaching it. Then

could be the nth triangular number… and we’d get a cool formula for the product of all numbers in the nth row of Pascal’s triangle!

is just approximately equal to 1, we should only expect an approximate formula for the product of all numbers in the nth row of Pascal’s triangle:

This was my hope. But how good are these approximations? I left this as a puzzle on Google+, and then Greg Egan stepped in and solved it.

For starters, he graphed the ratio

That looks pretty good: it looks like it’s approaching 1. But he also graphed the ratio

Not so good. Taking exponentials amplifies the errors. If we want a good asymptotic formula

we have to work harder. And this is what Egan did.

So far we’ve talked a lot about

the product of all numbers in the nth row in Pascal’s triangle… but we haven’t actually computed it. Let’s try: 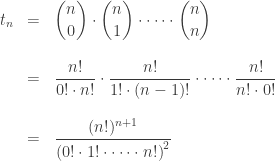 So, we’re seeing the superfactorial

raise its pretty head. This is also called the Barnes G-function, presumably by people who want to make it sound more boring.

Everyone I trust assures me this was a bad idea, not some deep insight… but Barnes doubled down on Euler’s mistake and defined his G-function so that

So, we’ll have to be careful when looking up formulas on Wikipedia: the superfactorial of n is

Now, there’s a great approximate formula for the logarithm of a factorial. It’s worth its weight in gold… or at least silver, so it’s called Stirling’s formula:

where the dots mean stuff that goes to zero when divided by the last term, in the limit

There’s also an approximate formula for the logarithm of the superfactorial! It’s a bit scary:

where the dots mean stuff that actually goes to zero as

Of course most mathematicians don’t care much about the digits; what we really want to know is what this constant means!

Euler, who did some wacky nonrigorous calculations, once argued that

Riemann made this rigorous by defining

and then analytically continuing this to other values of

He found that indeed

This fact has many marvelous ramifications: for example, it’s why bosonic string theory works best in 24 dimensions! It’s also connected to the

But anyway, we might wonder what happens if we compute

near -1. This is where the Glaisher–Kinkelin constant shows up, because if we try a Taylor series we get

To me, this means that

is more fundamental than A itself, and indeed you’ll see it’s this combination that shows up in the approximate formula for superfactorials. So, we can simplify that formula a bit:

Now, let’s use this together with Stirling’s formula to estimate the logarithm of the product of all numbers in the nth row of Pascal’s triangle. Remember, that’s

and exponentiating this gives a good approximation to

Here is a graph of

divided by this approximation, created by Egan:

As you can see, the ratio goes to 1 quite nicely!

So, we’ve seem some nice relationships between these things:

Puzzle 2. Can you take the formula

Any errors in the formulas above are my fault. Here are the papers that first squeezed e out of Pascal’s triangle:

I learned the idea from here, thanks to Richard Elwes:

For how Euler derived his crazy identity

and how it’s relevant to string theory, try:

This entry was posted on Wednesday, February 12th, 2014 at 2:43 pm and is filed under mathematics. You can follow any responses to this entry through the RSS 2.0 feed. You can leave a response, or trackback from your own site.