The Maxwell relations are some very general identities about the partial derivatives of functions of several variables. You don’t need to understand anything about thermodyamics to understand them, but they’re used a lot in that subject, so discussions of them tend to use notation from that subject.

Last time I went through a standard way to derive these relations for a function of two variables. Now I want to give a better derivation, which I found here:

This paper is just one page long, and I can’t really improve on it, but I’ll work through the ideas in more detail. It again covers only the case of a function of two variables, and I won’t try to go beyond that case now—maybe later.

So, remember the setup. We have a smooth function on the plane

We call the coordinates on the plane

and we give the partial derivatives of

None of these funny names or the minus sign has any effect on the actual math involved; they’re just traditional in thermodynamics. So, mathematicians, please forgive me! If I ever generalize to the n-variable case, I’ll switch to more reasonable notation.

We instantly get this:

Believe it or not, this simple relation contains all four of Maxwell’s relations within it!

To see this, note that both sides are smooth 2-forms on the plane. Now, the space of 2-forms at any one point of the plane is a 1-dimensional vector space. So, we can divide any 2-form at a point by any nonzero 2-form at that point and get a real number.

are functions on the plane such that

at some point. Then we can divide both sides of the above equation by

at this point. We can now get the four Maxwell relations simply by making different choices of

We’ll choose them to be either

The argument will only work if

so I’ll always assume that. The argument works the same way each time so I’ll go faster after the first time.

and substitute them into the above equation. We get

Next we use a little fact about differential forms and partial derivatives to simplify both sides:

If you were scarred as a youth when plausible-looking manipulations with partial derivatives turned out to be unjustified, you might be worried about this—and rightly so! Later I’ll show how to justify the kind of ‘cancellation’ we’re doing here. But anyway, it instantly gives us the first Maxwell relation:

and doing the same sort of ‘cancellation’ as last time, this gives the second Maxwell relation:

which gives the third Maxwell relation:

You can check that other choices of

don’t give additional relations of the same form.

So, we’ve see that all four Maxwell relations follow quickly from the equation

if we can do ‘cancellations’ in expressions like this:

when one of the functions

equals one of the functions

First of all, by the inverse function theorem, if

at some point in the plane, the functions

serve as coordinates in some neighborhood of that point. In this case we have

Yes: the ratio of 2-forms is just the Jacobian of the map sending

This is clear if you know that 2-forms are ‘area elements’ and the Jacobian is a ratio of area elements. But you can also prove it by a quick calculation:

is the desired determinant.

How does this help? Well, take

and now suppose that either 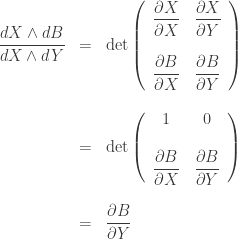 This justifies all our calculations earlier.

So, we’ve seen that all four Maxwell relations are unified in a much simpler equation:

which follows instantly from

This is a big step forward compared to the proof I gave last time, which, at least as I presented it, required cleverly guessing a bunch of auxiliary functions—even though these auxiliary functions turn out to be incredibly important in their own right.

So, we should not stop here: we should think hard about the physical and mathematical meaning of the equation

And Ritchie does this in his paper! But I will talk about that next time.

• Part 3: the physical meaning of Maxwell’s relations, and their formulation in terms of symplectic geometry.

For how Maxwell’s relations are connected to Hamilton’s equations, see this post:

This entry was posted on Saturday, September 18th, 2021 at 3:00 pm and is filed under mathematics, physics. You can follow any responses to this entry through the RSS 2.0 feed. You can leave a response, or trackback from your own site.