Ever since I became an environmentalist, the potential destruction wrought by aggressively expanding civilizations has been haunting my thoughts. Not just here and now, where it’s easy to see, but in the future.

A long time ago on this diary, I mentioned my friend Bruce Smith’s nightmare scenario. In the quest for ever faster growth, corporations evolve toward ever faster exploitation of natural resources. The Earth is not enough. So, ultimately, they send out self-replicating von Neumann probes that eat up solar systems as they go, turning the planets into more probes. Different brands of probes will compete among each other, evolving toward ever faster expansion. Eventually, the winners will form a wave expanding outwards at nearly the speed of light—demolishing everything behind them, leaving only wreckage.

The scary part is that even if we don’t let this happen, some other civilization might.

The last point is the key one. Even if something is unlikely, in a sufficiently large universe it will happen, as long as it’s possible. And then it will perpetuate itself, as long as it’s evolutionarily fit. Our universe seems pretty darn big. So, even if a given strategy is hard to find, if it’s a winning strategy it will get played somewhere.

So, even in this nightmare scenario of "spheres of von Neumann probes expanding at near lightspeed", we don’t need to worry about a bleak future for the universe as a whole—any more than we need to worry that viruses will completely kill off all higher life forms. Some fraction of civilizations will probably develop defenses in time to repel the onslaught of these expanding spheres.

It’s not something I stay awake worrying about, but it’s a depressingly plausible possibility. As you can see, I was trying to reassure myself that everything would be okay, or at least acceptable, in the long run.

Even earlier, S. Jay Olson and I wrote a paper together on the limitations in accurately measuring distances caused by quantum gravity. If you try to measure a distance too accurately, you’ll need to concentrate so much energy in such a small space that you’ll create a black hole!

That was in 2002. Later I lost touch with him. But now I’m happy to discover that he’s doing interesting work on quantum gravity and quantum information processing! He is now at Boise State University in Idaho, his home state.

What will happen if some civilizations start aggressively expanding through the Universe at a reasonable fraction of the speed of light? We don’t have to assume most of them do. Indeed, there can’t be too many, or they’d already be here! More precisely, the density of such civilizations must be low at the present time. The number of them could be infinite, since space is apparently infinite. But none have reached us. We may eventually become such a civilization, but we’re not one yet.

Each such civilization will form a growing ‘bubble’: an expanding sphere of influence. And occasionally, these bubbles will collide!

Here are some pictures from a simulation he did:

As he notes, the math of these bubbles has already been studied by researchers interested in inflationary cosmology, like Alan Guth. These folks have considered the possibility that in the very early Universe, most of space was filled with a ‘false vacuum’: a state of matter that resembles the actual vacuum, but has higher energy density.

A false vacuum could turn into the true vacuum, liberating energy in the form of particle-antiparticle pairs. However, it might not do this instantly! It might be ‘metastable’, like ball number 1 in this picture: 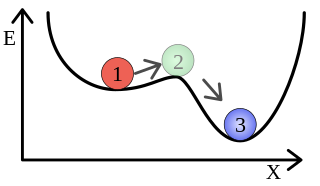 It might need a nudge to ‘roll over the hill’ (metaphorically) and down into the lower-energy state corresponding to the true vacuum, shown as ball number 3. Or, thanks to quantum mechanics, it might ‘tunnel’ through this hill.

The balls and the hill are just an analogy. What I mean is that the false vacuum might need to go through a stage of having even higher energy density before it could turn into the true vacuum. Random fluctuations, either quantum-mechanical or thermal, could make this happen. Such a random fluctuation could happen in one location, forming a ‘bubble’ of true vacuum that—under certain conditions—would rapidly expand.

It’s actually not very different from bubbles of steam forming in superheated water!

But here’s the really interesting Jay Olson noted in his first paper on this subject. Research on bubbles in the inflationary cosmology could actually be relevant to aggressively expanding civilizations!

Why? Just as a bubble of expanding true vacuum has different pressure than the false vacuum surrounding it, the same might be true for an aggressively expanding civilization. If they are serious about expanding rapidly, they may convert a lot of matter into radiation to power their expansion. And while energy is conserved in this process, the pressure of radiation in space is a lot bigger than the pressure of matter, which is almost zero.

So, the expansion of the Universe itself, on a very large scale, could be affected by aggressively expanding civilizations!

The fun part is that Jay Olson actually studies this in a quantitative way, making some guesses about the numbers involved. Of course there’s a huge amount of uncertainty in all matters concerning aggressively expanding high-tech civilizations, so he actually considers a wide range of possible numbers. But if we assume a civilization turns a large fraction of matter into radiation, the effects could be significant!

The effect of the extra pressure due to radiation would be to temporarily slow the expansion of the Universe. But the expansion would not be stopped. The radiation will gradually thin out. So eventually, dark energy—which has negative pressure, and does not thin out as the Universe expands—will win. Then the Universe will expand exponentially, as it is already beginning to do now.

(Here I am ignoring speculative theories where dark energy has properties that change dramatically over time.)

Here are his papers on this subject. The abstracts sketch his results, but you have to look at the papers to see how nice they are. He’s thought quite carefully about these things.

Abstract. In the context of a homogeneous universe, we note that the appearance of aggressively expanding advanced life is geometrically similar to the process of nucleation and bubble growth in a first-order cosmological phase transition. We exploit this similarity to describe the dynamics of life saturating the universe on a cosmic scale, adapting the phase transition model to incorporate probability distributions of expansion and resource consumption strategies. Through a series of numerical solutions spanning several orders of magnitude in the input assumption parameters, the resulting cosmological model is used to address basic questions related to the intergalactic spreading of life, dealing with issues such as timescales, observability, competition between strategies, and first-mover advantage. Finally, we examine physical effects on the universe itself, such as reheating and the backreaction on the evolution of the scale factor, if such life is able to control and convert a significant fraction of the available pressureless matter into radiation. We conclude that the existence of life, if certain advanced technologies are practical, could have a significant influence on the future large-scale evolution of the universe.

• S. Jay Olson, Estimates for the number of visible galaxy-spanning civilizations and the cosmological expansion of life.

Abstract. If advanced civilizations appear in the universe with a desire to expand, the entire universe can become saturated with life on a short timescale, even if such expanders appear but rarely. Our presence in an untouched Milky Way thus constrains the appearance rate of galaxy-spanning Kardashev type III (K3) civilizations, if it is assumed that some fraction of K3 civilizations will continue their expansion at intergalactic distances. We use this constraint to estimate the appearance rate of K3 civilizations for 81 cosmological scenarios by specifying the extent to which humanity could be a statistical outlier. We find that in nearly all plausible scenarios, the distance to the nearest visible K3 is cosmological. In searches where the observable range is limited, we also find that the most likely detections tend to be expanding civilizations who have entered the observable range from farther away. An observation of K3 clusters is thus more likely than isolated K3 galaxies.

• S. Jay Olson, On the visible size and geometry of aggressively expanding civilizations at cosmological distances.

Abstract. If a subset of advanced civilizations in the universe choose to rapidly expand into unoccupied space, these civilizations would have the opportunity to grow to a cosmological scale over the course of billions of years. If such life also makes observable changes to the galaxies they inhabit, then it is possible that vast domains of life-saturated galaxies could be visible from the Earth. Here, we describe the shape and angular size of these domains as viewed from the Earth, and calculate median visible sizes for a variety of scenarios. We also calculate the total fraction of the sky that should be covered by at least one domain. In each of the 27 scenarios we examine, the median angular size of the nearest domain is within an order of magnitude of a percent of the whole celestial sphere. Observing such a domain would likely require an analysis of galaxies on the order of a giga-lightyear from the Earth.

Here are the main assumptions in his first paper:

1. At early times (relative to the appearance of life), the universe is described by the standard cosmology – a benchmark Friedmann-Robertson-Walker (FRW) solution.

2. The limits of technology will allow for self-reproducing spacecraft, sustained relativistic travel over cosmological distances, and an efficient process to convert baryonic matter into radiation.

3. Control of resources in the universe will tend to be dominated by civilizations that adopt a strategy of aggressive expansion (defined as a frontier which expands at a large fraction of the speed of the individual spacecraft involved), rather than those expanding diffusively due to the conventional pressures of population dynamics.

4. The appearance of aggressively expanding life in the universe is a spatially random event and occurs at some specified, model-dependent rate.

5. Aggressive expanders will tend to expand in all directions unless constrained by the presence of other civilizations, will attempt to gain control of as much matter as is locally available for their use, and once established in a region of space, will consume mass as an energy source (converting it to radiation) at some specified, model-dependent rate.

This entry was posted on Friday, February 5th, 2016 at 1:00 am and is filed under astronomy, risks. You can follow any responses to this entry through the RSS 2.0 feed. You can leave a response, or trackback from your own site.