This blog post is based on a thread in the Azimuth Forum.

The current theories about the Sun’s life-time indicate that the Sun will turn into a red giant in about 5 billion years. How and when this process is going to be destructive to the Earth is still debated. Apparently, according to more or less current theories, there has been a quasilinear increase in luminosity. On page 3 of

The present Sun is increasing its average luminosity at a rate of 1% in every 110 million years, or 10% over the next billion years.

Unfortunately I feel a bit doubtful about this, in particular after I looked at some irradiation measurements. But let’s recap a bit.

In the Azimuth Forum I asked for information about solar irradiance measurements . Why I was originally interested in how bright the Sun is shining is a longer story, which includes discussions about the global warming potential of methane. For this post I prefer to omit this lengthy historical survey about my original motivations (maybe I’ll come back to this later). Meanwhile there is an also a newer reason why I am interested in solar irradiance measurements, which I want to talk about here.

Strictly speaking I was not only interested in knowing more about how bright the sun is shining, but how bright each of its ‘components’ is shining. That is, I wanted to see spectrally resolved solar irradiance measurements—and in particular, measurements in the range between the wavelengths of roughly 650 and 950 nanometers.

This led me to the the Sorce mission, which is a NASA sponsored satellite mission, whose website is located at the University of Colorado. The website very nicely provides an interactive interface including a fairly clear and intuitive LISIRD interactive app with which the spectral measurements of the Sun can be studied.

As a side remark I should mention that this NASA mission belongs to the NASA Earth Science mission, which is currently threatened to be scrapped.

By using this app, I found in the 650–950 nanometer range a very strange rise in radiation between 2003 and 2016, which happened mainly in the last 2-3 years. You can see this rise here (click to enlarge):

Now, fluctuations within certain spectral ranges within the Sun’s spectrum are not news. Here, however, it looked as if a rather stable range suddenly started to change rather “dramatically”.

I put the word “dramatically” in quotes for a couple of reasons.

Spectral measurements are complicated and prone to measurement errors. Subtle issues of dirty lenses and the like are already enough to suggest that this is no easy feat, so that this strange rise might easily be due to a measurement failure. Moreover, as I said, it looked as this was a fairly stable range over the course of ten years. But maybe this new rise in irradiation is part of the 11 years solar cycle, i.e., a common phenomenon. In addition, although the rise looks big, it may overall still be rather subtle.

So: how subtle or non-subtle is it then?

In order to assess that, I made a quick estimate (see the Forum discussion) and found that if all the additional radiation would reach the ground (which of course it doesn’t due to absorption), then on 1000 square meters you could easily power a lawn mower with that subtle change! I.e., my estimate was 1200 watts for that patch of lawn. Whoa!

That was disconcerting enough to download the data and linearly interpolate it and calculate the power of that change. I wrote a program in Javascript to do that. The computer calculations revealed an answer of 1000 watts, i.e., my estimate was fairly close. Whoa again!

How does this translate to overall changes in solar irradiance? Some increase had already been noticed. NASA wrote 2003 on its webpage:

Although the inferred increase of solar irradiance in 24 years, about 0.1 percent, is not enough to cause notable climate change, the trend would be important if maintained for a century or more.

I now used my program to calculate the irradiance for one day in 2016 between the wavelengths of 180.5 nm and 1797.62 nm, a quite big part of the solar spectrum, and got the value 627 W/m2. I computed the difference between this and one day in 2003, approximately one solar cycle earlier. I got 0.61 W/m2, which is 0.1% in 13 years, rather then 24 years. Of course this is not an average value, and not really well adjusted to the sun cycle, and fluctuations play a big role in some parts of the spectrum, but well—this might indicate that the overall rate of rise in solar radiation may have doubled. Likewise concerning the question of the sun’s luminosity: for assessing luminosity one would need to take the concrete satellite-earth orbit at the day of measurement into account, as the distance to the sun varies. But still, on a first glance this all appears disconcerting.

Given that this spectral range has for example an overlap with the absorption of water (clouds!), this should at least be discussed.

See how the spectrum splits into a purple and dark red line in the lower circle? (Click to enlarge.) 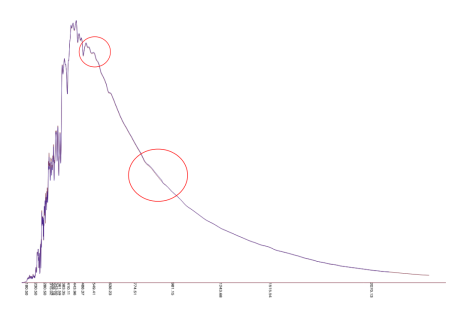 Difference in spectrum between day 132 and 5073

The upper circle displays another rise, which is discussed in the forum.

So concluding, all this looks as if this needs to be monitored a bit more closely. It is important to see whether these rises in irradiance are also displayed in other measurements, so I asked in the Azimuth Forum, but so far have gotten no answer.

The Russian Wikipedia site about solar irradiance unfortunately contains no links to Russian satellite missions (if I haven’t overlooked something), and there exists no Chinese or Indian Wikipedia about solar irradiance. I also couldn’t find any publicly accessible spectral irradiance measurements on the ESA website (although they have some satellites out there). In December I wrote an email to the head of the section solar radiometry of the World Radiation Center (WRC) Wolfgang Finsterle, but I’ve had no answer yet.

In short: if you know about publicly available solar spectral irradiance measurements other than the LISIRD ones, then please let me know.

This entry was posted on Saturday, January 14th, 2017 at 11:24 pm and is filed under astronomy, climate. You can follow any responses to this entry through the RSS 2.0 feed. You can leave a response, or trackback from your own site.