When we design a complex system, we often start with a rough outline and fill in details later, one piece at a time. And if the system is supposed to be adaptive, these details may need to changed as the system is actually being used!

The use of operads should make this easier. One reason is that an operad typically has more than one algebra.

When we have a ‘less detailed’ algebra

and a ‘more detailed’ algebra

they will typically be related by a map

which ‘forgets the extra details’. This map should be a ‘homomorphism’ of algebras, but I’ll postpone the definition of that concept.

What we often want to do, when designing a system, is not forget extra detail, but rather add extra detail to some rough specification. There is not always a systematic way to do this. If there is, then we may have a homomorphism

going back the other way. This is wonderful, because it lets us automate the process of filling in the details. But we can’t always count on being able to do this—especially not if we want an optimal or even acceptable result. So, often we may have to start with an element of

and search for elements of

that are mapped to it by

Let me give some examples. I’ll take the operad that I described last time, and describe some of its algebras, and homomorphisms between these.

I’ll start with an algebra that has very little detail: its elements will be simple graphs. As the name suggests, these are among the simplest possible ways of thinking about networks. They just look like this:

Then I’ll give an algebra with more detail, where the vertices of our simple graphs are points in the plane. There’s nothing special about the plane: we could replace the plane by any other set, and get another algebra of our operad. For example, we could use the set of points on the surface of the Caribbean Sea, the blue stuff in the rectangle here: 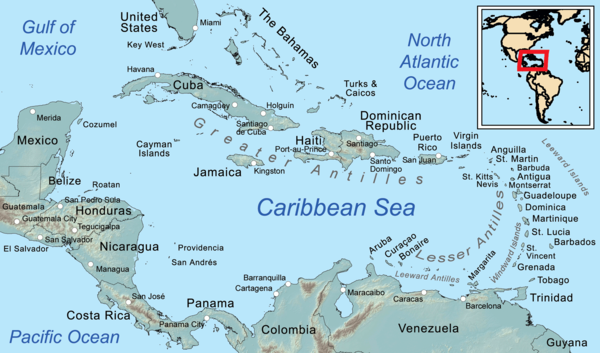 Then I’ll give an algebra with even more detail, where two points connected by an edge can’t be too far apart. This would be good for range-limited communication channels.

Then I’ll give an algebra with still more detail, where the locations of the points are functions of time. Now our boats are moving around!

The operad from last time was called

is the network model of simple graphs. The best way to picture an operation of

For example, an operation

is a way of sticking together a simple graph with 3 vertices, one with 4 vertices and one with 2 vertices to get one with 9 vertices. Here’s a picture of such an operation:

is just a simple graph with 9 vertices, where we have labelled the vertices from 1 to 9.

This operad comes with a very obvious algebra

where the operations do just what I suggested. In this algebra, an element of

is a simple graph with

is any natural number, which I’m calling ‘t’ for ‘type’.

We also need to say how the operations in

act on these sets

If we take simple graphs in

we can use our operation

to stick them together and get this:

But we can also make up a more interesting algebra of

We’ll let an element of

vertices, listed in order, which are points in the plane.

My previous pictures can be reused to show how operations in

act on this new algebra

The only difference is that now we tread the vertices literally as points in the plane! Before you should have been imagining them as abstract points not living anywhere; now they have locations.

Now let’s make up an even more detailed algebra

What if our communication channels are ‘range-limited’? For example, what if two boats can’t communicate if they are more than 100 kilometers apart?

Then we can let an element of

vertices in the plane such that no two vertices connected by an edge have distance > 100.

Now the operations of our operad

act in a more interesting way. If we have an operation, and we apply it to elements of our algebra, it ‘tries’ to put in new edges as it did before, but it ‘fails’ for any edge that would have length > 100. In other words, we just leave out any edges that would be too long.

It took me a while to figure this out. At first I thought the result of the operation would need to be undefined whenever we tried to create an edge that violated the length constraint. But in fact it acts in a perfectly well-defined way: we just don’t put in edges that would be too long!

This is good. This means that if you tell two boats to set up a communication channel, and they’re too far apart, you don’t get the ‘blue screen of death’: your setup doesn’t crash and burn. Instead, you just get a polite warning—‘communication channel not established’—and you can proceed.

The nontrivial part is to check that if we do this, we really get an algebra of our operad! There are some laws that must hold in any algebra. But since I haven’t yet described those laws, I won’t check them here. You’ll have to wait for our paper to come out.

Let’s do one more algebra today. For lack of creativity I’ll call it

Now an element of

is a time-dependent graph in the plane with

When I say ‘functions of time’ here, what ‘time’? We can model time by some interval

But if you don’t like that, you can change it.

try to create edges, but these edges only ‘take’ at times when the vertices they connect have distance ≤ 100.

There’s something here you might not like. Our operations can only try to create edges ‘for all times’… and succeed at times when the vertices are close enough. We can’t try to set up a communication channel for a limited amount of time.

And you might expect, we have algebra homomorphisms going from more detailed algebras to less detailed ones:

takes a simple graph in the plane and forgets the location of its vertices. The homomorphism

depends on a choice of time

We do not have a homomorphism

that takes a simple graph in the plane obeying our distance constraints and forgets about those constraints. There’s a map

in this way. But it’s not an algebra homomorphism! The problem is that first trying to connect two graphs with an edge and then applying

may give a different result than first applying

and then connecting two graphs with an edge.

Next time I’ll look at some more interesting algebras of the same operad. For example, there’s one that describes a system of interacting mobile agents, which move around in some specific way, determined by their location and the locations of the agents they’re communicating with.

Even this is just the tip of the iceberg—that is, still a rather low level of detail. We can also introduce stochasticity (that is, randomness). And to go even further, we could switch to a more sophisticated operad, based on a fancier ‘network model’.

The whole series of posts:

This entry was posted on Monday, September 4th, 2017 at 10:22 am and is filed under computer science, mathematics, networks. You can follow any responses to this entry through the RSS 2.0 feed. You can leave a response, or trackback from your own site.